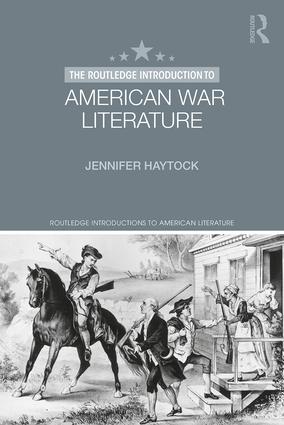 War and violence have arguably been some of the strongest influences on literature, but the relation is complex: more than just a subject for story-telling, war tends to reshape literature and culture. Modern war literature necessarily engages with national ideologies, and this volume looks at the specificity of how American literature deals with the emotional, intellectual, social, political, and economic contradictions that evolve into and out of war. Raising questions about how American ideals of independence and gender affect representations of war while also considering how specifically American experiences of race and class interweave with representations of combat, this book is a rich and coherent introduction to these texts and critical debates.

"Jennifer Haytock writes in her introduction: 'A good reader of any literature asks questions. A good reader of American war literature may come away with some uncomfortable answers but, hopefully, with a greater knowledge of how writers have approached one of the most compelling and consequential of human experiences.' In this accessible, clearly written volume, Haytock examines how American writers have used fiction, non-fiction, drama, and poetry to grapple with the central issues of war: combat, killing, and the profound impact all of this has on soldiers who survive. She also offers insights regarding the complex intersections of race, gender, and war, as well as examines literature produced "behind the front lines" by those who did not engage directly in combat. Moreover, this comprehensive historical survey of American war literature, which begins with this nation’s earliest wars and concludes with wars fought in the 21st century, allows Haytock to trace both continuities as well as significant shifts over time. A valuable, insightful resource for professors and students alike interested in reading war literature and grappling with challenging questions."

"Jennifer Haytock’s Routledge Introduction to American War Literature is the best single-author overview I have ever read on this enormous subject, ranging from the Atlantic Contact Era, the Forest Wars of the colonies, and the American Revolution, through the Civil War, World War I, World War II, Korea and Vietnam, and the Desert Wars of the late 20th and early 21st century. The introductory essay defining the topic is in its own right a tour de force, useful to both the general reader and the literary specialist. The individual chapters elaborate clearly and commandingly on the main premises of argument. The text is intelligent and insightful throughout, with extended discussions of both major and lesser-known texts (a recurrent and interesting feature) augmented through enlightening overviews of popular reception and critical history. I also commend especially Haytock’s work on the literatures of early American warfare and also on the war literature of the post-Vietnam War era, two areas of original and important contribution on the author’s part."

Literature of the American Indian Wars and Revolutionary War

Literature of the American Civil War

Literature of World War I

Literature of the Wars in Korea and Viet Nam

Literature of the Wars in the Persian Gulf, Iraq, and Afghanistan

Jennifer Haytock is Professor of English at The College at Brockport, SUNY. Her work includes At Home, At War: Domesticity and World War I in American Literature, two other monographs, and articles on Ernest Hemingway, Edith Wharton, Willa Cather, and novels about the wars in Iraq and Afghanistan.

Routledge Introductions to American Literature provide critical introductions to the most important topics in American Literature, outlining the key literary, historical, cultural, and intellectual contexts. Providing students with an analysis of the most up-to-date trends and debates in the area, they also highlight exciting new directions within the field and open the way for further study. Volumes examine the ways in which both canonical and lesser known writers from diverse class and cultural backgrounds have shaped American literary traditions, addressing key contemporary and theoretical debates, and giving attention to a range of voices and experiences as a vital part of American life. These comprehensive volumes offer readable, cohesive narratives of the development of American Literature and provide ideal introductions for students.