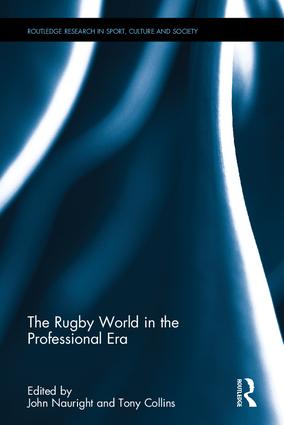 The Rugby World in the Professional Era

Twenty years of professionalism has seen rugby union undergo dramatic transformations, from changes to everyday training cultures to the growth of the Rugby World Cup into one of the largest global sporting events. The Rugby World in the Professional Era is the first book to examine the effect that professionalism has had across a number of different aspects of the game and the wider socio-cultural significance of these changes through case studies from across the globe.

Drawing on contributions from scholars from across the rugby-playing world, the book explores the role of rugby's professionalisation through a number of social-scientific lenses, including:

Offering insights into under-researched areas of the sport, such as the growth of Rugby Sevens into an Olympic sport, and providing the most up-to-date recent history of the sport available, The Rugby World in the Professional Era is essential reading for anyone with an academic interest in rugby, and any student or scholar with interests in sports history, sports sociology, sport management or the economics of professional sport.

Part 1: Professional Rugby On and Off the Field

2. Cows in the Heartland: New Zealand Rugby and Rural Change in the Professional Era (Greg Ryan)

3. The World Comes to One Country: Migration, Cultures and Professional Rugby in France (Philip Dine)

5. The Maori All Blacks and Ethnicity in Aotearoa/New Zealand in the Professional Era (Farah Palmer)

6. The Impact of the Professional Era on Pacific Islands Rugby (Robert Dewey)

7. The Globalisation of Rugby 7s: From Novelty to the Olympic Games (Jeremy Stewart and Marc Keech)

Part 2: Rugby Cultures and Representation in the Professional Era

10. The Road From Wigan Pier: Professional Rugby and the Changing Dynamics Between Wales and England (John Harris)

12. Performativity, Identities and Rugby From Field to Stage in the New South Africa (Carla Lever)

John Nauright is Chair and Professor of the Department of Kinesiology, Health Promotion and Recreation at the University of North Texas, USA. He is the author of Rugby and the South African Nation and Long Run to Freedom: Sport, Cultures and Identities in South Africa. He is also editor of Making Men: Rugby and Masculine Identity and Making the Rugby World: Race, Gender, Commerce. He was consultant and talking head for the BBC Wales series The Union Game, a global history of rugby union

Tony Collins is Professor of Sports History and former Director of the International Centre for Sports History and Culture at De Montfort University in Leicester, UK. He is the author of The Oval World: A Global History of Rugby; A Social History of English Rugby Union; Rugby’s Great Split: Class, Culture and the Origins of Rugby League Football; Rugby League in Twentieth Century Britain; and Sport in Capitalist Society