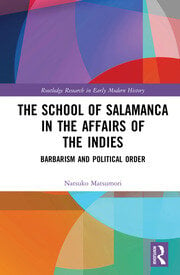 The School of Salamanca in the Affairs of the Indies: Barbarism and Political Order

The School of Salamanca in the Affairs of the Indies

explores the significance of Salamancans, such as Vitoria and Soto, and related thinkers, such as Las Casas and Sepúlveda, in the formation of the early modern political order. It also analyses early modern understandings of political order, with a focus both on the decline of the medieval universal world through the independence and secularization of political community and the establishment of continuous and imbalanced relations between various European and non-European political communities.

Through its investigation, this book highlights how Salamancans and related thinkers clearly distinguished their understandings of political order from medieval thought, and did so in a different way to contemporary and later thinkers, such as Machiavelli, Luther, Bodin, and Grotius, particularly with regards to the Indies, “barbarian” worlds. It also reveals the strong contribution of the School of Salamanca in early modern political thought, both internally and externally. Salamancans imposed moral restrictions against “interior barbarism,” that is, power beyond law, and included “exterior barbarism,” that is, “barbarian” societies, in the common political order.

Chapter I: The Early-Modern Understanding of Political Order and the School of Salamanca; Chapter II: Reason and Prudence: The Nature of the Indians; Chapter III: Power, Commonwealth, and the Law of Nations: The Legitimacy of the Spanish Dominion over the Indies; Chapter IV: Conditions of Just War: The Conquest of the Indies; Chapter V: Significance and Problems of the Salamancan Understanding of Political Order

Natsuko Matsumori is Associate Professor of Political Thought at the University of Shizuoka, Japan. She researches the scholastic influence on the formation of the early-modern political order and her previous publications include Civilización y barbarie (2005, in Spanish) and From Barbarism to Order (2009, in Japanese).