The Second Amendment and Gun Control
Freedom, Fear, and the American Constitution 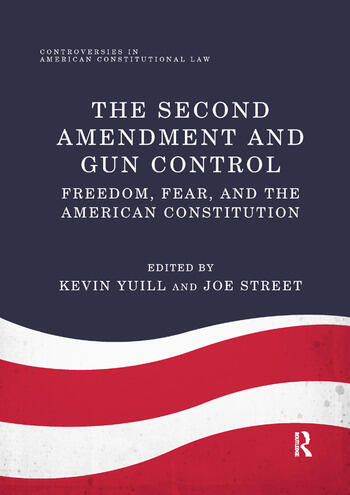 The Second Amendment and Gun Control: Freedom, Fear, and the American Constitution

The Second Amendment, by far the most controversial amendment to the US Constitution, will soon celebrate its 225th anniversary. Yet, despite the amount of ink spilled over this controversy, the debate continues on into the 21st century. Initially written with a view towards protecting the nascent nation from more powerful enemies and preventing the tyranny experienced during the final years of British rule, the Second Amendment has since become central to discussions about the balance between security and freedom. It features in election contests and informs cultural discussions about race and gender.

This book seeks to broaden the discussion. It situates discussion about gun controls within contemporary debates about citizenship, culture, philosophy and foreign policy as well as in the more familiar terrain of politics and history. It features experts on the Constitution as well as chapters discussing the symbolic importance of Annie Oakley, the role of firearms in race, and filmic representations of armed Hispanic girl gangs. It asks about the morality of gun controls and of not imposing them.

The collection presents a balanced view between those who favour more gun controls and those who would prefer fewer of them. It is infused with the belief that through honest and open debate the often bitter cultural divide on the Second Amendment can be overcome and real progress made. It contains a diverse range of perspectives including, uniquely, a European perspective on this most American of issues.

Chapter 3: Annie Get Your Gun: Women, Performance and the Western Heroine - Karen Jones

Chapter 4: "A gun is a gun is anyone’s hand;" Shooting the Gang Girl in Mi Vida Loca - Emma Horrex

Chapter 5: "The Thought of a Black Male with a Weapon Scares America": African Americans, the Second Amendment, and the Racial Politics of Armed Self-Defense in the Civil Rights Era and Beyond - Simon Wendt and Rebecca Rössling

Chapter 6: From Virtuous Armed Citizen to "Cramped Little Risk-Fearing Man": The Meaning of Firearms in an Insecure Era - Kevin Yuill

Chapter 7: Gun Rights and the Rule of Law - Firmin DeBrabander

Chapter 8: To endure for all time or to change with the times? The Supreme Court and the Second Amendment - Emma Long

Chapter 10: The Universal Right of Self-Defense, and the Auxiliary Right to Defensive Arms - David B. Kopel

Kevin Yuill is Senior Lecturer in American History at the University of Sunderland. His research and teaching interests are broad and interdisciplinary. His concentration is on intellectual history of the United States. He has written on gun control in A Cultural History of Firearms in an Age of Empire (Ashgate Press, pp. 211-230) and in journalistic articles. His monographs include Richard Nixon and the Rise of Affirmative Action: The Pursuit of Racial Equality in an Era of Limits (Rowman and Littlefield, 2006). He has also written on race and foreign policy in the United States at the turn of the century (The spectre of Japan: the influence of foreign relations on race relations theory, 1905–24, Patterns of Prejudice, 2015) and is currently completing a manuscript on the 1924 Immigration Act.

Joe Street is Senior Lecturer in History at Northumbria University, Newcastle. His work focuses on the San Francisco Bay Area in the postwar period and African American radicalism in the 1960s and 1970s. His publications include: Dirty Harry’s America: Clint Eastwood, Harry Callahan, and the Conservative Backlash (University Press of Florida, 2016), The Culture War in the Civil Rights Movement (University Press of Florida, 2007) and various articles on African American radicalism.