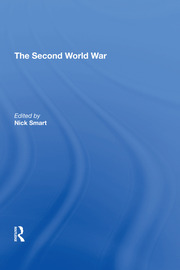 The significant and sustained popular interest in the Second World War is matched by the scale and scope of scholarly engagement in the subject. The articles selected for this volume cover a wide range of topics reflecting the fact that the largest recorded war in history and the most intense period of global instability in the twentieth century, was fought by many different states, large and small, over differing periods of time and for many different reasons. In an area where there is no shortage of material to choose from, the articles presented here are distinguished for their depth of scholarship, stylistic elegance and inter-disciplinary confidence.