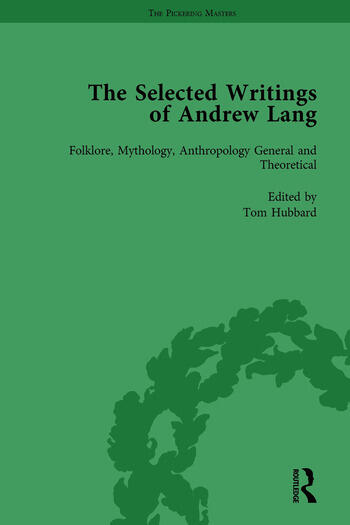 A novelist, poet, literary critic and anthropologist, Andrew Lang is best known for his publications on folklore, mythology and religion; many have grown up with the ‘colour’ Fairy Books which he compiled between 1889 and 1910. This three volume set presents a selection of his work in these areas. The first volume covers the general and theoretical aspects of Lang’s work on folklore, mythology and anthropology along with the tools and concepts which he used in his often combative contributions to these inter-related disciplines.

Collectively, the General Introduction to the set and the Introductions to the individual volumes offer a thorough overview of Lang’s work in an astonishing variety of fields, including his translation work on Homer and his contributions to historiography (particularly Scottish). Headnotes to the individual items are of varying length and provide more detail on specific topics, and explanatory notes supply unique intellectual comment rather than merely factual information.

Note on the Texts

Introduction to Volume I

‘The Romance of the First Radical’, in his In the Wrong Paradise and other stories, 1886

‘Savage Spiritualism’, in his Cock-Lane and Common Sense, 1894

‘The Ghost Theory of the Origin of Religion’, in his Cock-Lane and Common Sense, 1894

[On Émile Durkheim’s theory of the origin of society], Longman’s Magazine, 1904

‘The Comparative Study of Early Epics’, in his Homer and His Age, 1906

‘Method and the Study of Totemism’, The American Anthropologist, 1912