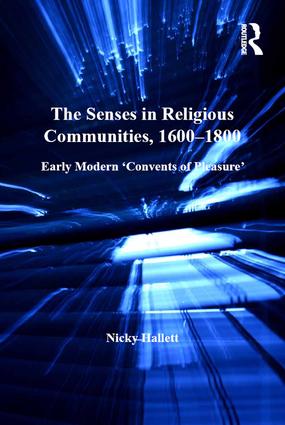 Offering a comprehensive analysis of newly-uncovered manuscripts from two English convents near Antwerp, this study gives unprecedented insight into the role of the senses in enclosed religious communities during the period 1600-1800. It draws on a range of previously unpublished writings-chronicles, confessions, letters, poetry, personal testimony of various kinds-to explore and challenge assumptions about sensory origins. Author Nicky Hallett undertakes an interdisciplinary investigation of a range of documents compiled by English nuns in exile in northern Europe. She analyzes vivid accounts they left of the spaces they inhabited and of their sensory architecture: the smells of corridors, of diseased and dying bodies, the sights and sounds of civic and community life, its textures and tastes; their understanding of it in the light of devotional discipline. This is material culture in the raw, providing access to a well-defined locale and the conditions that shaped sensory experience and understanding. Hallett examines the relationships between somatic and religious enclosure, and the role of the senses in devotional discipline and practice, considering the ways in which the women adapted to the austerities of convent life after childhoods in domestic households. She considers the enduring effects of habitus, in Bourdieu's terms the residue of socialised subjectivity which was (or was not) transferred to a contemplative career. To this discussion, she injects literary and cultural comparisons, considering inter alia how writers of fiction, and of domestic and devotional conduct books, represent the senses, and how the nuns' own reading shaped their personal knowledge. The Senses in Religious Communities, 1600-1800 opens fresh comparative perspectives on the Catholic domestic household as well as the convent, and on relationships between English and European philosophy, rhetorical, medical and devotional discourse.

’… a fascinating study of an unusual, interesting, and hitherto unstudied archive that provides useful and new insights into how the fields of early modern gender studies and sensory history intersect… This book will undoubtedly have a huge impact in shaping the contours of the fast-evolving field of sensory history, particularly in its analysis of gender and religion.’ Holly Dugan, The George Washington University, USA 'Hallett has made a stunningly original contribution to the critical conversation on early modern female monasticism, and, furthermore, this book will no doubt prompt others' contributions to the conversation as well.' Historians of Women Religious of Britain and Ireland '… Hallett’s book is provocative throughout, evoking localized atmospheres that extend current understandings of the senses in the early modern period. …one key thread throughout is conduct literature, allowing Hallett to offer a rich investigation of the nature of cloistered being. This lively and engaging study will be of great interest to scholars working on the senses, religion, gender, and women writers.' Renaissance Quarterly '… the strength of the book comes from [Hallett's] own intense engagement with the archives, the texts, and the writing, reading, and praying women themselves. … this book will be of interest to a wide range of early modern scholars, whether interested in the history of reading, English Catholicism(s), or women's embodied experiences.' Seventeenth-Century News ’[This book] is a precious, well-informed, beautifully researched addition to the existing canonical historiography, yet it quite deliberately remains at the margins, both through its subject and its form. It is audacious, scholarly and lyrical at once, it defies the rigid pigeon-holes of genres, and engages readers fully by not always giving them what they expected when and where they would have expected it. It is also a landmark in the developing scholarship on early moder

Nicky Hallett is a Senior Lecturer in the School of English at the University of Sheffield, UK.