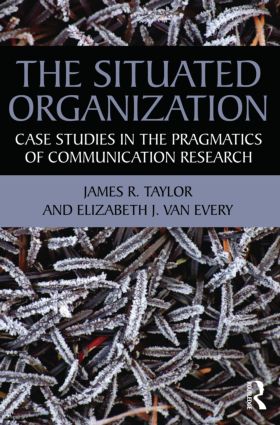 Case Studies in the Pragmatics of Communication Research, 1st Edition

The text breaks through with an alternative viewpoint to the currently popular idea of 'organization-as-network,' viewing organization instead as a configuration of agencies, and their fields of practice. It serves as an original, comprehensive, and well-written text, elaborated by case studies that make the theory come to life. The substantial ideas and insights are presented in a deep and meaningful way while remaining comprehensible for student readers.

This text has been developed for students at all levels of study in organizational communication, who need a systematic introduction to conducting empirical field research. It will serve as an invaluable sourcebook in planning and conducting research.

"What happens when a fresh but solid foothold in the theory of pragmatics starts to interact with a range of novel case studies in communication research? Read it yourself and be inspired!"

"The Situated Organization is an innovative work that accomplishes its purpose: to present its readers with theories and to reflect upon such theories through empirical studies."

"This book develops an interesting conceptual framework based on the idea of "organization-as-thirdness". Applying concepts from semiotic, philosophy of language, ethnomethodology, etc; the authors put forth a convincing argument demonstrating the constructive role of communication in organization."

Prologue: The Puzzle of Organization

Chapter 1: The Premise of Organization as Thirdness

Chapter 2: The Frame Game, And How Communication Establishes and Distributes Organizational Authority

Chapter 3: Language as Both Meaning and Action

Chapter 4: Text as the Constitutive Basis of Organization

Chapter 5: The Accounts of a Business—Or Perhaps Rather the Business of Accounting?

Chapter 6: Playing On the Game while Playing In the Game—Frames, Identities and the "Fall Plan"

Chapter 7: The Organization as Text

Chapter 8: The "Western," 21st Century Version—Mapping the Boundaries Through Texts

Chapter 9: The Organization as Thirdness, or How to Do Organizational Communication Research

James R. Taylor is Professor Emeritus and founder of the Department of Communication at the University of Montreal. He is the author, co-author or editor of six books, including The Emergent Organization (2000).

Elizabeth J. Van Every is an historian and sociologist by training and has worked in both the public and private sectors. She has co-authored two previous books with James Taylor: The Vulnerable Fortress (1993) and The Emergent Organization (2000) as well as co-edited The Computerization of Work (2001) and Communication as Organizing (2006).