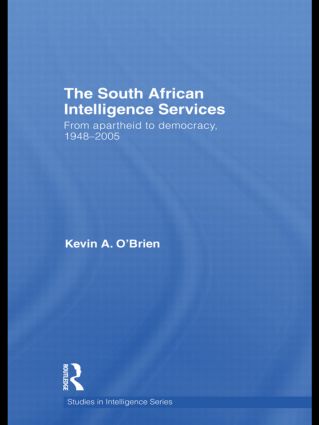 By Kevin A. O'Brien

Covering the apartheid period of 1948-90, the transition from apartheid to democracy of 1990-94, and the post-apartheid period of new intelligence dispensation from 1994-2005, this book examines not only the apartheid government’s intelligence dispensation and operations, but also those of the African National Congress, and its partner, the South African Communist Party (ANC/SACP) – as well as those of other liberation movements and the ‘independent homelands’ under the apartheid system. Examining the civilian, military and police intelligence structures and operations in all periods, as well as the extraordinarily complicated apartheid government’s security bureaucracy (or 'securocracy') and its structures and units, the book discusses how South Africa’s Cold War ‘position’ influenced its relationships with various other world powers, especially where intelligence co-operation came to bear. It outlines South Africa’s regional relationships and concerns – the foremost being its activities in South-West Africa (Namibia) and its relationship with Rhodesia through 1980.

Finally, it examines the various legislative and other governance bases for the existence and operations of South Africa’s intelligence structures – in all periods – and the influences that such activities as the Rivonia Trial (at one end of the history) or the Truth and Reconciliation Commission (at the other end) had on the evolution of these intelligence questions throughout South Africa’s modern history.

This book will be of great interest to all students of South African politics, intelligence studies and international politics in general.

"Kevin O’Brien provides a clearly structured account of the development of the South African intelligence services from 1948 to 2005, within the context of increased resistance and counter-revolutionary strategies by the state… an intriguing read." - Chris Saunders, University of Cape Town; South African Historical Journal, 63:4

"The South African Intelligence Services is a unique, well documented study that will serve as the definitive work on the topic from the “intelligence dispensation” point of view." - Hayden Peake, Center for the Study of Intelligence; Studies in Intelligence, Vol. 55 No. 3

Kevin A. O’Brien has served for a number of years as a senior advisor to Western government and critical infrastructures sectors on public security and intelligence matters. He is currently a senior analyst with the Government of Canada. He has a PhD in International Politics (Security Studies) from the University of Hull.