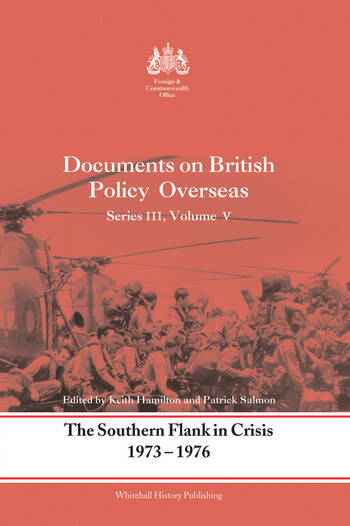 A fascinating collection of British foreign policy documents covering reactions in Whitehall to political change and revolution in the Mediterranean basin from 1973 to 1976.

This volume contains many previously unpublished documents, including Joint Intelligence Committee papers, which cast new light on key events, such as the international crisis triggered by the coup against Archbishop Makarios in Cyprus, Turkey’s military intervention in the island, the overthrow of the Caetano regime in Portugal, and the death of Franco in Spain.

During 1973-76, years generally associated with East/West détente in Europe, NATO’s southern flank was plunged into crisis by a revolution in Portugal and a coup d’état in Cyprus. Political turmoil in Portugal, Turkey’s military intervention in Cyprus, the collapse of the military government in Greece, and the threat of a Greco-Turkish War, all emphasized the vulnerability of the alliance to regime change in the Mediterranean. The Western allies had also to prepare for the death of two ageing dictators in Spain and Yugoslavia, and the possible entry of Communists into government in France and Italy. This volume draws upon the records of the Foreign and Commonwealth Office, the Cabinet Office and the Ministry of Defence, to document the reactions of Harold Wilson’s Labour government to these developments.

'Reflecting on his years as Foreign Secretary, James Callaghan noted that foreign policy was ‘a mixture of the old and the new. We may initiate but we also inherit’.  This fascinating new compilation of recently declassified documents, edited by Keith Hamilton and Patrick Salmon, reveals the truth of Callaghan’s words.'
Alexander Wieland, Office of the Historian, US Department of State