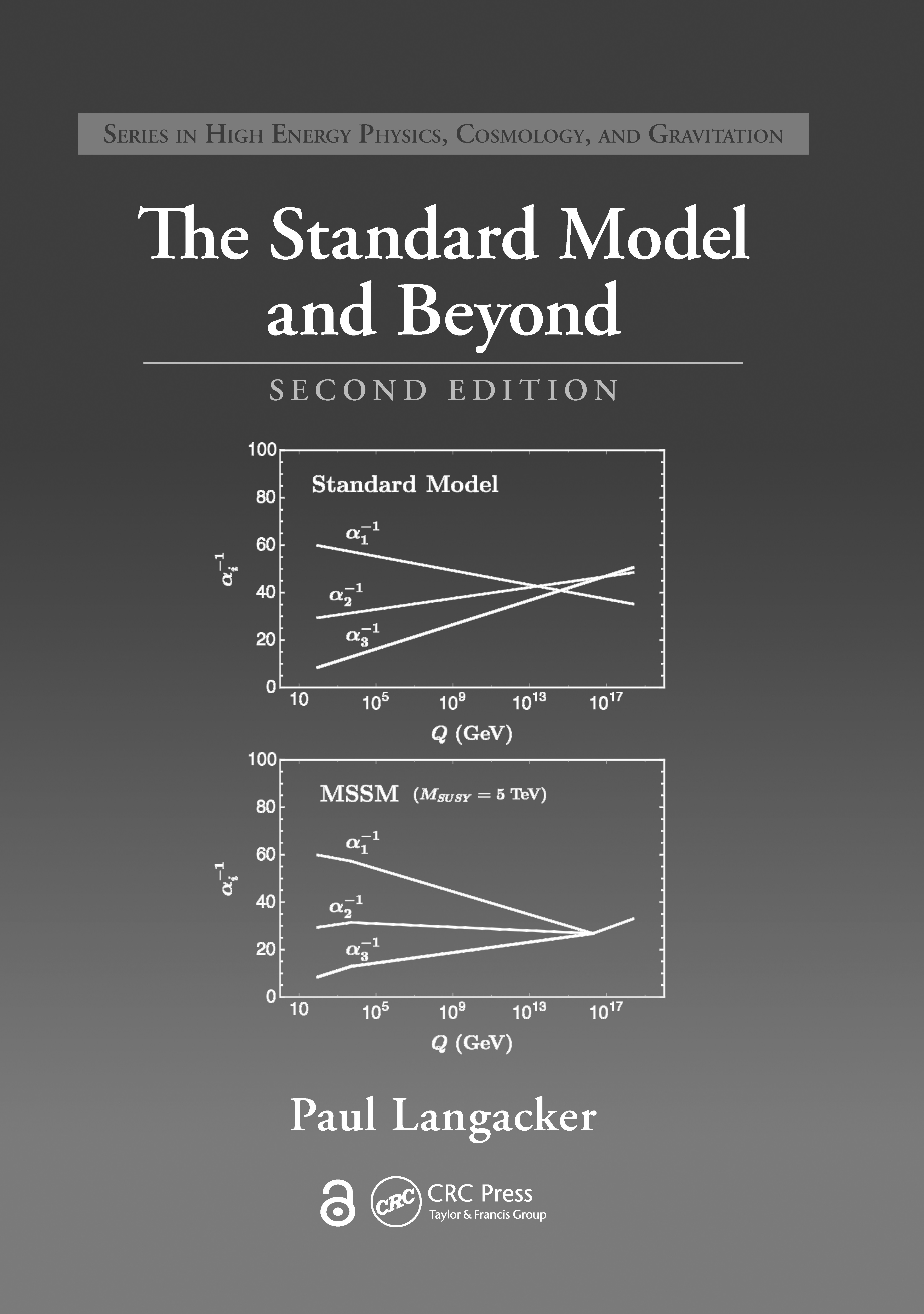 The Standard Model and Beyond

This new edition of The Standard Model and Beyond presents an advanced introduction to the physics and formalism of the standard model and other non-abelian gauge theories. It provides a solid background for understanding supersymmetry, string theory, extra dimensions, dynamical symmetry breaking, and cosmology. In addition to updating all of the experimental and phenomenological results from the first edition, it contains a new chapter on collider physics; expanded discussions of Higgs, neutrino, and dark matter physics; and many new problems.

The book first reviews calculational techniques in field theory and the status of quantum electrodynamics. It then focuses on global and local symmetries and the construction of non-abelian gauge theories. The structure and tests of quantum chromodynamics, collider physics, the electroweak interactions and theory, and the physics of neutrino mass and mixing are thoroughly explored. The final chapter discusses the motivations for extending the standard model and examines supersymmetry, extended gauge groups, and grand unification.

Thoroughly covering gauge field theories, symmetries, and topics beyond the standard model, this text equips readers with the tools to understand the structure and phenomenological consequences of the standard model, to construct extensions, and to perform calculations at tree level. It establishes the necessary background for readers to carry out more advanced research in particle physics.

Supplementary materials are provided on the author’s website and a solutions manual is available for qualifying instructors.

"The textbook by Paul Langacker gives a comprehensive…overview about the Standard Model of Elementary Particle Physics and beyond…. the full Standard Model including mathematical foundations and current experimental references is fully reviewed. After each chapter, the reader finds quite an extensive set of problems which allows [them] to deepen the previously learned knowledge…The book is clearly not intended to serve theorists in their daily life but rather an experimental physicist to understand the theory behind and perform some simple calculations. However, as a kind of compendium and standard reference it is a worthy tool for everybody in the field."

"The 2009 first edition of The Standard Model and Beyond provided a long-needed and thorough introductory textbook that focused on the advances in phenomenology that led to the highly successful Standard Model of Elementary Particle Physics. Its author, Paul Langacker, is well known not only for his research, but also his communication skills both as a lecturer and writer. However, much has happened over the last seven years, as the Higgs scalar was discovered, thus completing the minimal spectrum of the Standard Model, whilst the field of neutrino physics continued to mature. At the same time, a number of leading speculations regarding ‘new physics’, beyond the Standard Model, failed to be observed, causing a re-examination of some beliefs. This newly updated second edition explores such constraints on ‘new physics’ ideas, in addition to exploring recent discoveries and advances in the field. The text remains lucid, thorough, and well-worth having, and so I strongly recommend it as a resource for students and researchers who wish to understand, and help continue, the legacy of scientific exploration and discovery."

"This second edition of Professor Paul Langacker’s book on The Standard Model and Beyond includes a brand new chapter on Collider Physics that describes the basic theory for calculations of high-energy particle collisions at the Large Hadron Collider. All graduate students in particle physics should read this book. I found it to be inspirational!"

"Paul Langacker, a renowned expert on particle physics, here presents the successful theoretical framework describing the interactions among the fundamental constituents of matter and the pending problems that still need to be solved. Starting from the most basic concepts, the book introduces the different elements of the Standard Model and discusses its most important experimental tests, from the empirical facts which suggested the Lagrangian structure to the most recent LHC data on the Higgs boson. A few representative directions to search for new physics beyond the Standard Model are also reviewed. The book includes a lot of complementary material, with useful appendices, suggested problems, and many references. It is a very comprehensive and valuable summary, which will be of great interest to a broad audience of readers interested in learning about our current understanding of the fundamental laws of nature."

"The Standard Model and Beyond is a fantastic comprehensive compendium of all that young particle physicists must learn, and senior ones must not forget. It can serve both as an introduction to the most advanced topics, and as a prompt look-up reference for explicit results or bibliography. The first part contains a concise refresher on the basics of particle physics, from quantum fields to symmetries and group theory. Both formal and phenomenological topics are covered, and, together with thorough appendices, a large number of useful exercises and common-use results are offered. The Standard Model is covered from a modern perspective, but without neglecting its roots in Fermi theory. This second edition updates the state of the art in precision studies of the electroweak sector, reviewing the implications of the latest measurements of the Higgs boson, the top quark, and heavy flavours. The final part introduces the theoretical and experimental motivations of theories beyond the Standard Model. The formalism, applications, and open challenges in neutrino physics, supersymmetry, and grand unification are covered in detail in the light of the latest experimental results. These sections will enable young researchers to follow the most advanced research directions in particle physics phenomenology, and help them select their own projects. A large set of complementary resources are also available online, including codes for amplitude calculations, solutions to selected exercises, and links to tools and bibliography. This is the physics book to take with you for a sabbatical on a desert island!"

"This fine book, updating the 2009 edition, has maintained its excellent treatment of a broad spectrum of topics in high energy physics. It will serve both as a definitive reference and as a primary text in a full-year course at the graduate level for students who have already been exposed to quantum field theory. The exercises are plentiful and well-chosen, providing valuable hands-on experience for both beginners and seasoned researchers. Many subjects benefit from the author's first-hand research experience, making the book an especially authoritative source. Results both in and beyond the standard model of particle physics are presented in an engaging and conversational style, with copious text and article references, but the author also provides plentiful explicit calculations. The reader who works through them will be truly empowered by this tour de force of presentation.

The ground for discussion of physics beyond the standard model is carefully prepared by presenting the necessary formalism in a manner as independent as possible of specific schemes. Precision physics within the standard model

is highlighted, allowing one to spot key discrepancies. The major development since the First Edition, the discovery of the Higgs boson with properties completely consistent with standard model predictions, has been treated

in detail, with a thorough study of its implications. The choice of subjects beyond the standard model includes an extensive discussion of supersymmetry, a treatment of gauge theories beyond SU(3) x SU(2) x U(1), and schemes of grand unification."

"The Standard Model and Beyond is an authoritative, comprehensive account of the standard model of particle physics, the quantum field theory that underlies it, and the detailed phenomenology needed to confront it with experiment. It is a stand-alone text and reference that covers all aspects of the field of high energy physics. Its usefulness is enhanced by multiple tables covering topics such as Fierz identities, gamma matrix transformation properties, and many more, that practitioners frequently have to dig in their research notebooks to recall. The second edition has updated all experimental results and their associated phenomenology, and has added a new chapter on collider physics and expanded treatments of currently active topics, including the Higgs boson and dark matter physics. The book references are usefully grouped by topic, and there is an extensive bibliography of articles and an excellent index. Each chapter contains problems, so the book is suitable as a graduate level text in particle physics, as well as an indispensable reference for practicing theoretical and experimental high energy physicists."

"Langacker’s book is probably the best one available to provide a simultaneously broad and deep survey of the status of the Standard Model of particle physics and efforts to extend it. It covers a remarkable range of topics, and does so technically and reliably. He starts at the beginning, with a solid introduction to field theory and needed formalisms, and includes a thorough treatment of neutrino masses, followed by a good introduction to supersymmetry. He consistently includes relevant experimental information, at a good level of detail. He provides sixty-five pages of references, making this an unusually valuable guide to most topics of interest. The book will be a superb reference guide to workers in the field, as well as a fine way to learn particle physics."

"… Paul Langacker is a pioneer in the field of high-precision tests of the Standard Model. … Langacker’s book is likely to play a pivotal role at this juncture when the plethora of ‘new physics’ and alternative models have emerged while experimental data has become too intricate to be comprehensible even to the experts. … Masterly treatment on the Standard Model by Langacker in Chapter 7, in my opinion, is the heart of the book. … Decades of past experience of the author in the area of precision tests make the writing lucid and transparent. … A thorough study of the book would enable the reader to unravel the intricacies involved in the claims of ‘new physics.’ … Langacker comprehensively demonstrates the spectacular successes of the Standard Model … This book would be of great utility to learn and do high quality particle physics in the age of LHC for both theorists and experimentalists. What about ‘new physics’? As and when this happens, the contents of the book would be helpful to focus on the matter-of-fact physics and interpret the new data. …"

"… This substantial book — at more than 600 pages — gives a detailed and lucid summary of the theoretical foundations of the Standard Model, and possible extensions beyond it. …I heartily recommend it to particle physicists as a great single-volume reference, especially useful to experimentalists. It also provides a firm, graduate-level foundation for theoretical physicists who plan to pursue concepts beyond the Standard Model to a greater depth."

The Strong Interactions and QCD

Beyond the Standard Model

Appendix B: Derivation of a Simple Feynman Diagram

Appendix E: Calculation of the Anomalous Magnetic Moment of the Electron

Paul Langacker is an Emeritus Professor of Physics and Astronomy at the University of Pennsylvania. He is currently a Senior Scientist at Princeton University and a long-term visitor at the Institute for Advanced Study. His research has emphasized the connections between fundamental theory and experiment, and has included work in precision electroweak physics, grand unification, neutrino physics, Z’ physics, and string phenomenology.