The State and the Paradox of Customary Law in Africa 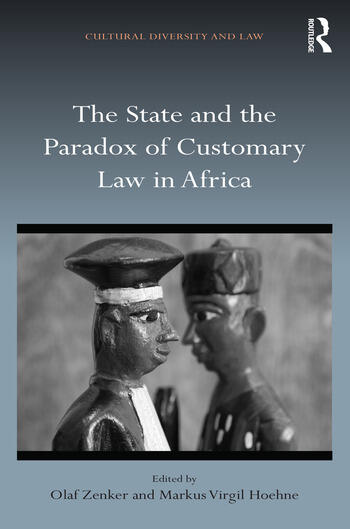 The State and the Paradox of Customary Law in Africa

Customary law and traditional authorities continue to play highly complex and contested roles in contemporary African states. Reversing the common preoccupation with studying the impact of the post/colonial state on customary regimes, this volume analyses how the interactions between state and non-state normative orders have shaped the everyday practices of the state. It argues that, in their daily work, local officials are confronted with a paradox of customary law: operating under politico-legal pluralism and limited state capacity, bureaucrats must often, paradoxically, deal with custom – even though the form and logic of customary rule is not easily compatible and frequently incommensurable with the form and logic of the state – in order to do their work as a state. Given the self-contradictory nature of this endeavour, officials end up processing, rather than solving, this paradox in multiple, inconsistent and piecemeal ways. Assembling inventive case studies on state-driven land reforms in South Africa and Tanzania, the police in Mozambique, witchcraft in southern Sudan, constitutional reform in South Sudan, Guinea’s long durée of changing state engagements with custom, and hybrid political orders in Somaliland, this volume offers important insights into the divergent strategies used by African officials in handling this paradox of customary law and, somehow, getting their work done.

Chapter 1: Processing the paradox: when the state has to deal with customary law - Olaf Zenker & Markus Virgil Hoehne

Chapter 5: When the state is forced to deal with local law: approaches of and challenges for state actors in emerging South Sudan - Katrin Seidel

Olaf Zenker is Professor and Chair of Social Anthropology at the Martin Luther University Halle-Wittenberg, Germany. He has published on modern statehood, rule of law, bureaucracy, justice, land reform as well as conflict and identity formations in South Africa and Northern Ireland. His book publications include the co-edited volumes South African Homelands as Frontiers: Apartheid’s Loose Ends in the Postcolonial Era (Routledge, 2017), Transition and Justice: Negotiating the Terms of New Beginnings in Africa (Wiley-Blackwell, 2015), Beyond Writing Culture: Current Intersections of Epistemologies and Representational Practices (Berghahn Books, 2010) as well as the monograph Irish/ness Is All around Us: Language Revivalism and the Culture of Ethnic Identity in Northern Ireland (Berghahn Books, 2013).

Markus Virgil Hoehne is Lecturer at the Institute of Social Anthropology at the University of Leipzig, Germany. He works on conflict, identity, state formation, borderlands, transitional justice and forensic anthropology in Somalia. He is the author of Between Somaliland and Puntland: Marginalization, Militarization and Conflicting Political Visions (Rift Valley Institute 2015), the editor of a special issue on The Effects of 'Statelessness': Dynamics of Somali Politics, Economy and Society Since 1991 (Journal of Eastern African Studies, 2013), and co-editor of Borders and Borderlands as Resources in the Horn of Africa (James Currey, 2010) and Milk and Peace, Drought and War: Somali Culture, society and Politics (Hurst, 2010).

‘A tour de force of the most profound kind - The State and the Paradox of Customary Law in Africa offers audacious insights into the dilemmas and paradoxes of "living customary law" that have emerged as key concerns of the twenty-first century. […] It offers profound interventions into the desperately needed terrain for rethinking the modernity of customary law and its implications for Africa and beyond.’

'Zenker and Hoehne and their contributors have done an admirable job of trying to bring intellectual order into the analysis of a very complex and fraught topic. […] The originality of Zenker and Hoehne's approach is evident in their carefully reasoned Introduction in which they propose innovative theoretical criteria for sorting out the issues involved.'

'Bringing together legal pluralism and the anthropology of the state, the authors offer a fresh and stimulating perspective on the various interactions between African states and local customs, much more complex and developed than has been said before. They brilliantly explore the modes of state engagement with customs and chiefs.'

'Zenker and Hoehne have given us a major contribution to the study of the realities of legal pluralism in the context of the day-to-day business of the state. This innovative volume stands out for its in-depth examination of how state agents in Africa creatively enact spatiotemporal legal hybridity as part of their official work.'

'Zenker and Hoehne’s volume provides a fresh and revitalizing analysis of contemporary customary law in Africa. The State and the Paradox of Customary Law in Africa innovatively investigates how the state, enmeshed in complex national and transnational structures of law and governance, is transformed by the agency of local actors strategizing in the arena of customary law.'