The Statecraft of Consensus Democracies in a Turbulent World
A Comparative Study of Austria, Belgium, Luxembourg, the Netherlands and Switzerland 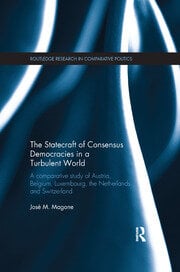 The Statecraft of Consensus Democracies in a Turbulent World: A Comparative Study of Austria, Belgium, Luxembourg, the Netherlands and Switzerland

Drawing on the work of Arend Lijphart, this book focuses on consensus democracies. These democracies entail a complex set of democratic institutional and conventional arrangements and can be regarded as a product of path-dependent development towards a national culture of compromise and bargaining.

Taking a multi-dimensional and multi-spatial approach, this book examines the West central European consensus democracies of Austria, Belgium, Luxembourg, Netherlands and Switzerland, over the past 40 years. Magone examines how these democracies have been transformed by Europeanization thrusts and global turbulence yet are able to maintain political stability. It provides historical context including the different phases of transformation: the golden period (1945-1979); disorganised capitalism (1979-1993); and re-equilibration (1993-). It includes chapters on political culture, government, parliament, the rise of populism and political parties, subnational government, and the political economy and concludes deliberating on the relevance of consensus democracies’ experiences for the future of European and global governance.

Based on original research, this book will be of strong interest to students and scholars of comparative politics, European government, West European politics, the politics of small states in Europe, and those with a particular interest in the politics of Austria, Belgium, the Netherlands, Luxembourg and Switzerland.

1. The Statecraft of Consensus Democracies

Strategic Management in Consensus Democracies: A Permanent Process of Re-equilibration

The Great Transformation of the Late Twentieth Century and Consensus Democracies

From International to Global Politics and Governance

Europeanization of National Politics: From Government to Multilevel Governance

Politics: Political Change, Insecurity and the Rise of Populism

Structure of the Book

2. The Creation and Development of Consensus Democracies

Between Autonomy and Centralization: The Origins of the Netherlands, Belgium and Luxembourg (1300-1848)

The Difficult Road to Internal Statehood: The Case of Switzerland (1291-1848)

The Making of Consensus Democracies (1815-1945): The Nationalization of Politics

The Nationalization of Politics in Austria: The Difficult Mentality Change from Empire to Small State

Switzerland: From Civil War to a Virtuous Evolution towards Inclusive Democracy

The Netherlands: Evolutionary Democracy in a Centralized State

Belgium: From a Model Constitution to a Consensual Democracy

Luxembourg: Reinventing its Identity through Democratisation

Switzerland: The ‘Magic Formula’ and the Continuity of Consensus Politics

The Netherlands: Consensus Democracy and the Scientification of Policy Making

Belgium: Consensus and Conflict in a Divided Country

Luxembourg: The Creation of a National Model

Austria: The Politics of Memory and European Integration

The Netherlands: Reviving the Polder Model

Belgium: From Unitary to a Federal State

Luxembourg: Consensus as a Way of Life

Longevity of Constitutions and Change in Consensus Democracies

The Head of State and The Government

The Structure and Procedures of Parliament

The Constitutional and Administrative Court System

4. Society and Civic Culture Introduction: The Complexity of Consensus Democracies

From Welfare State to the Social Investment State: Recommodifying Labour

The Civic Culture: Attitudes towards Politics, Democracy and the Political System

From Pillarised to a New Strong Civil Society

5. The Americanization of Electoral and Party Politics

Introduction: The Rise of Populism in Americanized Electoral Markets

From Pillarization to Americanization

The Political Families in the Twentieth First Century

Contextual Variables of the Party System

The Electoral System: The Importance of Proportional Representation

Party System Change and Decline of the Established Parties

The Rise of Total Volatility in Consensus Democracies

The Fragmentation of the Party System

Conclusions: The Americanization of Party Systems in Consensus Democracies

6. Patterns of Government in Consensus Democracies

The Cabinet: Collegiality and Ministerial Autonomy

Conclusions: The Art of Sharing Power

7. The Institutional Performance of Parliaments in Consensus Democracies

The Structure of Parliaments: The Lower House

The Upper Chamber: A Chamber of Reflection

The Institutional Performance of Parliaments

Conflict and Consensus in the Legislative Process

8. The Regional and Local Patterns of Consensus Democracies

Introduction: The Deepening of Consensus Democracies

Patterns of Subnational Democracy in Unitary States: The Netherlands and Luxembourg

Conclusions: Subnational Government in an Age of Europeanization and Globalization

Varieties of Coordinated Capitalism in the Context of Europeanization and Globalization

Industrial Relations as Coordination: From Interventionist to Light Neo-Corporatism

The Netherlands: Continuity and Flexibility in the Polder Model

Luxembourg; Cooperation and Coordination in the Luxembourg Social Model Austria: The Re-Invention of Social Corporatism

Conclusions: Coordination and Flexibility in a European Setting

10.Consensus Democracies as a Model for European and Global Governance

The Statecraft of Consensus Democracies in West Central Europe

The Primacy of Political Stability: Coalition Government and Parliamentary Majority

Changing Architecture of Politics: From Welfare to Competition State

The Hybridization of Coordinated Market Economies and the welfare State

Big Democracy and Small Democracy: The Importance of Civil Society

The Necessity of European Union Governance

Consensus Democracies as Model for other Small States

The Role of European Union in Promoting pax democratica

Conclusions: Consensus Democracies as a Way of Life

José M. Magone is Professor of Regional and Global Governance at the Berlin School of Economics and Law, Germany.