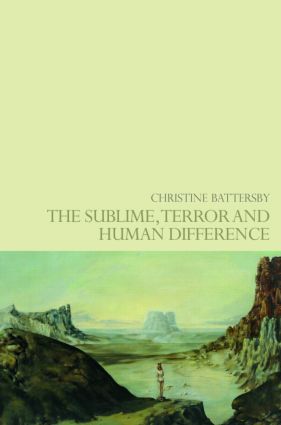 The Sublime, Terror and Human Difference

Christine Battersby is a leading thinker in the field of philosophy, gender studies and visual and literary aesthetics. In this important new work, she undertakes an exploration of the nature of the sublime, one of the most important topics in contemporary debates about modernity, politics and art.

Through a compelling examination of terror, transcendence and the ‘other’ in key European philosophers and writers, Battersby articulates a radical ‘female sublime’. A central feature of The Sublime, Terror and Human Difference is its engagement with recent debates around ‘9/11’, race and Islam. Battersby shows how, since the eighteenth century, the pleasures of the sublime have been described in terms of the transcendence of terror. Linked to the ‘feminine’, the sublime was closed off to flesh-and-blood women, to ‘Orientals’ and to other supposedly ‘inferior’ human types. Engaging with Kant, Burke, the German Romantics, Nietzsche, Derrida, Lyotard, Irigaray and Arendt, as well as with women writers and artists, Battersby traces the history of these exclusions, while finding resources within the history of western culture for thinking human differences afresh

‘Battersby's new study offers challenging arguments backed up by detailed textual analysis; her treatment of Kant is a real tour de force, and the writing is clear and vivid. The examination is especially deep on the subjects of gender, the female, and the feminine in relation to the concept of the sublime.’ - Carolyn Korsmeyer, University at Buffalo, USA

'…a rich and insightful treatment of the aesthetics and the politics of the sublime. It is impressive not only for its historical range and philosophical perspicuity, but likewise for its thoughtful treatment of questions of race, gender and the event of 9/11. Philosophers, political theorists, and students of cultural studies alike will benefit from Battersby's original and nuanced intervention.' - Robert Gooding-Willliams, The University of Chicago, USA

'Christine Battersby's deep understanding of the history of the idea of the sublime has enabled her to present a new account of it that is sensitive to multicultural and especially feminist concerns. This wonderfully informative and stimulating study deserves a wide readership.' - Robert Bernasconi, The University of Memphis, USA

Acknowledgments Table of Contents Abbreviations 1: A Terrible Prospect 2: Terror, Terrorism and the Sublime 3: Kant and the Unfair Sex 4: Kant’s Orientalism: Islam, ‘Race’ and Ethnicity 5: Egypt, Parerga And A Question Of Veils 6: Ourself Behind Ourself, Concealed 7: Antinomies of the Female 8: Nietzsche and the Genealogy of the Sublime 9: Nietzsche’s Naked Goddess: Reconfiguring The Sublime 10: Terror Now and Then Notes Bibliography Index

Christine Battersby is Reader in Philosophy at the University of Warwick. She is a leading philosophical thinker, with specific interests in feminist metaphysics and aesthetics and the author of Gender and Genius: Towards a Feminist Aesthetics and The Phenomenal Woman: Feminist Metaphysics and the Patterns of Identity.