The Syrian Involvement In Lebanon Since 1975 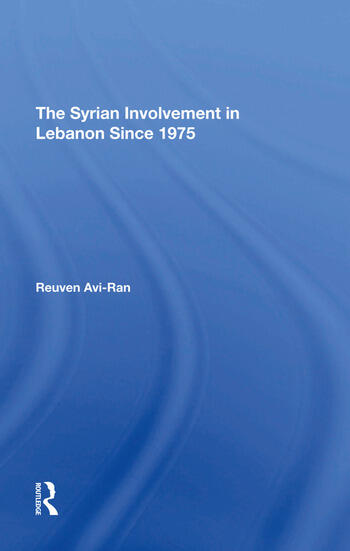 The Syrian Involvement In Lebanon Since 1975

Studies in International Politics -- Preface -- Introduction: Origins of the Syrian Involvement in Lebanon -- The Syrian Involvement in the Lebanese Civil War, 1975-1976 -- The Process of Syrian Involvement in the Civil War -- Syria and External Factors -- Syria's Failure to Turn Military Achievement to Political Advantage, 1977-1981 -- The Beginnings of the Consolidation of Syrian Power in Lebanon -- The Conflict between Syria and the Christian Camp (1978) -- The Struggle for Southern Lebanon -- Syria and the Lebanese War, 1981-1985 -- Renewed Hostilities between Syria and the Lebanese Forces (December 1980-June 1981) -- The "Missile Crisis" and the Events Leading Up to the Peace for Galilee Operation (April 1981-June 5,1982) -- Syria's Role in the Peace for Galilee Operation (June 6-September 1,1982) -- Syria's Struggle against the Achievements of the Peace for Galilee Operation (September 1982-May 1985) -- The Effects of the Lebanese Crisis on the Assad Regime -- The Assad Regime and the Lebanese Crisis -- The Period since the Lebanese War: Syria's Continuing Challenges -- Syria in Lebanon: An Overview