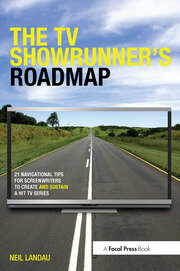 The TV Showrunner's Roadmap: 21 Navigational Tips for Screenwriters to Create and Sustain a Hit TV Series

If you’ve ever dreamed of being in charge of your own network, cable, or web series, then this is the book for you. The TV Showrunner’s Roadmap provides you with the tools for creating, writing, and managing your own hit show. Combining his 20+ years as a working screenwriter and UCLA professor, Neil Landau expertly guides you through 21 essential insights to the creation of a successful show, and takes you behind the scenes with exclusive and enlightening interviews with showrunners from some of TV’s most lauded series, including:

From conception to final rewrite, The TV Showrunner’s Roadmap is an invaluable resource for anyone seeking to create a series that won’t run out of steam after the first few episodes. This groundbreaking guide features a companion website with additional interviews and bonus materials. www.focalpress.com/cw/landau

So grab your laptop, dig out that stalled spec script, and buckle up. Welcome to the fast lane.

Chapter 10: Get to the Heart of Your Story
Interview: Jason Katims – Parenthood

Chapter 11: Know Who and What They’re Up Against
Interview: Tim Kring – Touch

Chapter 15: Pique Our Interest with a Potent Teaser
Interview: Dawn Prestwich and Nicole Yorkin* – The Riches

Chapter 17: Pay Off the Setups
Interview: Veena Sud – The Killing

Chapter 18: Establish the Mythology
Interview: Adam Horowitz and Edward Kitsis – Once Upon a Time

Chapter 19: Push Them Off a Cliff
Interview: Michael Kelley – Revenge

Neil Landau is a screenwriter, producer, author, and professor in the MFA in Screenwriting and Producing Programs at UCLA School of Film, Television & Digital Media. His movie credits include the teen comedy Don’t Tell Mom the Babysitter’s Dead; his TV credits include Doogie Howser, M.D., Melrose Place, The Magnificent Seven, The Secret World of Alex Mack, Twice in a Lifetime, and MTV’s Undressed, and pilot deals at CBS, Disney, Freemantle, Lifetime, Spelling, and Warner Bros. Television. He served as executive script consultant for Sony Pictures Television International for many years, is a faculty member in the Academy of Television Arts & Sciences, and just won a Spanish Academy ("Goya") Award for best screenplay adaptation for the animated movie Tad the Lost Explorer, 2012; he is now working on the sequel, and a new animated movie: Capture the Flag for Paramount.

I've been an Executive Producer on twelve scripted TV Series and I can honestly say that everything I've learned about how to sell, create, and operate a show is contained in Neil Landau's The TV Showrunner's Roadmap. Anyone with the ultimate goal of becoming a Creator/Executive Producer of a television series should read this book, as should anyone interested in knowing how their favorite show came to be. — Gavin Polone, television and film producer, Curb Your Enthusiasm, Gilmore Girls, Twisted, Zombieland, Panic Room

Neil Landau, screenwriter, producer and one of Hollywood's best writing teachers, has blessed us with this amazing guide to the world of television writing and show running.  I wrote and produced television for twenty-three years and I learned invaluable skills from this book that I never even aquired on the job." — Fred Rubin, veteran TV producer; UCLA Professor of Screenwriting; and Instructor for the ABC/Disney, Warner Brothers, and Nickelodeon Writers' Fellowships

Neil has not only beautifully and succinctly tackled an enormous subject —  what it takes to be a television showrunner —  he also has provided a blueprint for any writer forging through the turbulent and ever-changing waters of producing TV series. He gives good common sense information and advice on working in television. And he writes in a clear, understandable, and entertaining way. But the unique value of the book is the interviews from an impressive list of top showrunners, who recount their own experiences. I'd recommend this book to anyone looking for a career in the television business. — Stephen Tao, Television Executive, Bad Robot Productions

Neil's book is a must-read for anyone serious about the craft of writing for television. His analysis of the fundamentals is clear, precise, and entertaining. But it's his one-on-one conversations with showrunners currently working at the top of of their game that makes this book a true gem, giving the reader fly-on-the-wall access to some of the best minds in the business. — Channing Dungey, Executive Vice-President, Drama, ABC Entertainment Group

If I had my wish, I would insist that every TV writer -- from the youngest "baby" staff writer to the most experienced showrunner -- read this book!  Then I'd get every producer, studio honcho, development executive, and summer intern to read it, too ... because Neil's book really IS the roadmap to TV series in the 21st century! — Tana Nugent Jamieson, Senior Vice-President, in charge of all scripted programming, A&E (Bates Motel, Longmire, The Glades)

The ultimate "how to" guide for anyone working in TV. Whether you're a writer, an executive, or just a TV watcher, Neil highlights every aspect of the unrelenting task of producing television, leaving us with even more respect for the process and those who do it successfully. It's the most comprehensive guide I've ever read, supported by interviews with the most talented writers working in the business today. A fantastic and insightful read! — Maira Suro, Executive Producer of the Emmy nominated series The 4400, former Senior Vice-President of Development and Current Series at NBC-Universal Cable Productions, former President at American Zoetrope Television, and former Director of Drama Development at CBS

Neil’s is the book that finally demystifies the process of breaking into and staying in the business. It’s an invaluable guide filled with step-by-step advice about how to navigate the not-always-obvious industry pitfalls. Ignore his advice at your own risk! — Elizabeth Wise Lyall, Current Programming, CW Television Networks

Neil Landau has written the most comprehensive, thoughtful, and insightful guide to television series. Every chapter elegantly details the craftsmanship required for a successful show as well as the inspiration and fortitude. Neil's encyclopedic knowledge puts a unique spin on his fascinating interviews with showrunners and creators.  This is a book for writers, executives, creative thinkers and leaders, and tv fans. — Laverne McKinnon, producer, former network executive at CBS and EPIX

This extraordinary book is a portable Master's degree in television writing. Neil asks all the questions you're dying to know and the answers will make you a better writer. You will experience television in a whole new way after reading it. For the professional currently working in the industry, for students trying to break in, and TV fans in general - stop what you're doing and BUY THIS BOOK. Neil is the real deal and this book is an invaluable resource. — Kelly Fullerton, Story Editor, The Fosters

If you’re serious about a career in TV screenwriting and want to find out how to make a success of it, this book is a very valuable guide. If you’re simply a couch potato, it still provides lots of amazing stories about how the shows you watch get made. Either way, The TV Showrunner’s Roadmap is a great read. - Nazia Khan, Ahlan! Live