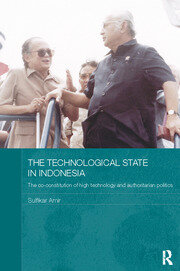 The Technological State in Indonesia: The Co-constitution of High Technology and Authoritarian Politics

Using a historical sociology approach, this book illustrates the formation of the technological state in Indonesia during the New Order period (1966-1998). It explores the nexus between power, high technology, development, and authoritarianism situated in the Southeast Asian context.

The book discusses how the New Order regime shifted from the developmental state to the technological state, which was characterized by desire for technological supremacy. The process resulted in the establishment of a host of technological institutions and the undertaking of large-scale high-tech programs. Shedding light on the political dimension of socio-technological transformation, this book looks at the relationship between authoritarian politics and high technology development, and examines how effectively technology serves to sustain legitimacy of an authoritarian power.

It explores into multiple features of the Indonesian technological state, covering the ideology of development, the politics of technocracy, the institutional structure, and the material and symbolic embodiments of high technology, and goes on to discuss the impact of globalization on the technological state. The book is an important contribution to studies on Southeast Asian Politics, Development, and Science, Technology, and Society (STS).

Sulfikar Amir is an Assistant Professor in the Division of Sociology at Nanyang Technological University, Singapore. His research interests include science and technology studies, technological politics, development, nationalism, globalization, sociology of risk, and resilience studies.

"Theoretically sophisticated and empirically refreshing, The Technological State in Indonesia offers fascinating insight into the interplay of power, technology and authoritarian politics in late-New Order Indonesia. Rejecting a technologically deterministic perspective, Sulfikar Amir demonstrates convincingly how modernist visions, power relations and legitimacy needs shaped the process of technological adoption and development in Indonesia under Suharto. At the same time, Amir makes an original contribution to the study of Indonesian politics by showing that the New Order regime was much more than just a military dictatorship or a developmental state. This book fills a critical void in our knowledge of Indonesian politics in the late Suharto era." - Tuong Vu, University of Oregon, USA

"The book successfully argues that a national airplane project was viable and Indonesian engineers, given enough time, money and resources could develop a truly indigenous national airplane, notably the N250, which was to be the flagship of the project... This is a timely and important book that provides important lessons to both the Indonesian government and private sector in crafting a strategy to create a technological state." - Yohanes Sulaiman; Strategic Review, 2013.

"The author combines historical description and sociological analysis in an engaging way, and his analysis of the intersection between high-tech development and authoritarianism is reflected throughout the book." - R. Alpha Amirrachman; Contemporary Southeast Asia Vol. 35, No. 1, 2013.

'Amir’s book offers a new lens to understand New Order Indonesia through his focus on the career and achievements of B. J. Habibie, one of the New Order’s most enigmatic and powerful figures... Amir does a fine job of integrating techno-politics into standard accounts of the Indonesian state, making a strong case for the New Order as much more than just a military regime, but also a ‘technological state’... Amir’s careful account adds new insights to our understanding of the relation between technology and politics and its ability to establish powerful associations between the local, the national and the modern.' - Itty Abraham, National University of Singapore, Singapore; Science, Technology & Society 18:2, 2013.