The Theoretical and Philosophical Foundations of Criminal Law 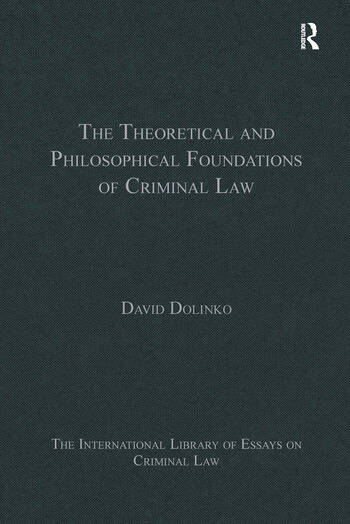 The Theoretical and Philosophical Foundations of Criminal Law

The last fifty years have seen a notable expansion of philosophical scrutiny of the fundamental concepts and structures of Anglo-American criminal law and this volume offers a selection from journal articles and book chapters of significant and influential work in this field. Taken together, these essays illustrate how contemporary philosophical reflection on criminal law has broadened its focus beyond the longstanding and still active debate over the moral legitimacy of punishment. In addition to punishment, the subjects also covered in this collection range from excuse and justification defenses and the conundrums of attempt liability to the bases of culpability and criminal responsibility and the appropriate limits of the criminal law. The introduction clarifies the contexts in which these subjects are discussed, and the volume includes an extensive bibliography.

David Dolinko is Professor of Law at UCLA School of Law, USA. He writes extensively on criminal law and punishment and is one of the editors of the 'Oxford Handbook of Philosophy of Criminal Law'.