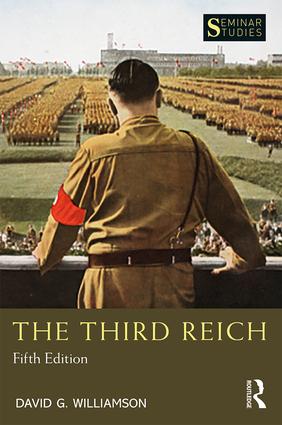 The Third Reich is a succinct, comprehensive examination of the major debates surrounding this crucial period in modern German history. The character and operation of the Nazi state, and of its global consequences, have been discussed and disputed since 1933. David G. Williamson’s Seminar Studies text, now in its fifth edition, provides students with a lucid introduction to the Third Reich and highlights the relevant research, scholarship and controversies.

The new edition has been expanded to give increased coverage to such topics as: ethnic cleansing in Poland and Russia, the role of the Wehrmacht, the Holocaust, attitudes of ordinary Germans to the Third Reich, the German opposition, Nazi foreign policy and the German economy.

Accompanied by a wide range of primary sources, a timeline, maps and a glossary, The Third Reich remains the best available introduction to this short-lived but enormously impactful period in world history.

2. THE ORIGINS AND RISE OF NATIONAL SOCIALISM

12. THE THIRD REICH IN RETROSPECT

has written extensively on modern German and European history. Among his recent publications are Poland Betrayed: The Nazi Soviet Invasions of 1939 (2011), Germany Since 1789: A Nation Forged and Renewed (2nd edition, 2016) and, also in the Seminar Studies series, Bismarck and Germany (3rd edition, 2010). Formerly head of history at Highgate School, he is now a writer and freelance lecturer.