The Transformation of the International Order of Asia
Decolonization, the Cold War, and the Colombo Plan 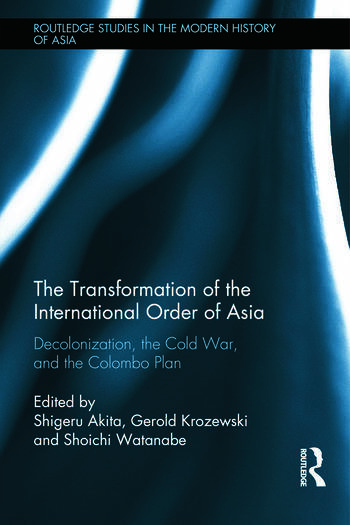 The Transformation of the International Order of Asia: Decolonization, the Cold War, and the Colombo Plan

In Asia the 1950s were dominated by political decolonization and the emergence of the Cold War system, and newly independent countries were able to utilize the transformed balance of power for their own economic development through economic and strategic aid programmes. This book examines the interconnections between the transfer of power and state governance in Asia, the emergence of the Cold War, and the transfer of hegemony from the UK to the US, by focusing specifically on the historical roles of international economic aid and the autonomous response from Asian nation states in the immediate post-war context.

The Transformation of the International Order of Asia

offers closely interwoven perspectives on international economic and political relations from the 1950s to the 1960s, with specific focus on the Colombo Plan and related aid policies of the time. It shows how the plan served different purposes: Britain’s aim to reduce India’s wartime sterling balances in London; the quest for India’s economic independence under Jawaharlal Nehru; Japan’s regional economic assertion and its endeavour to improve its international status; Britain’s publicity policy during the reorganization of British aid policies at a time of economic crisis; and more broadly, the West’s desire to counter Soviet influence in Asia. In doing so, the chapters explore how international economic aid relations became reorganized in relation to the independent development of states in Asia during the period, and crucially, the role this transformation played in the emergence of a new international order in Asia.

Drawing on a wide range of international contemporary and archival source materials, this book will be welcomed by students and scholars interested in Asian, international, and economic history, politics and development studies.

Shigeru Akita is Professor in the Graduate School of Letters at Osaka University, Japan.

Gerold Krozewski is a Research Fellow the School of Graduate Studies at University of the Free State, South Africa.

Shoichi Watanabe is Professor in the Department of History at Tohoku Gakuin University, Japan.