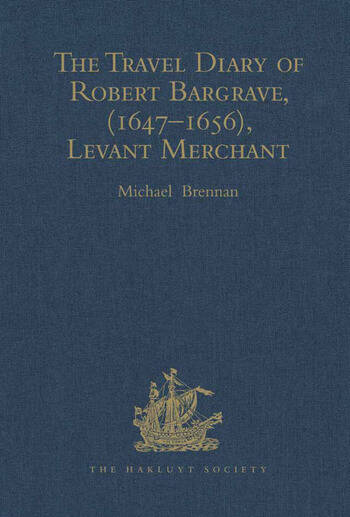 This is the first fully annotated old-spelling edition of the entire text of the autograph English journal of Robert Bargrave (1628-61), recording his extensive travels as a merchant. This manuscript (now Bodleian Library MS Rawlinson C 799), describes four separate journeys made by Bargrave: his sea voyage from England to Constantinople; an arduous return journey overland from Constantinople to England, via Bulgaria, Romania, Poland, Germany, and the Low Countries; extensive travels, for both commercial and cultural purposes, in Spain, Sicily, Italy and the Morea; and a return journey from Venice to Margate, via Trento, Innsbruck, and Augsburg, including his visit to Heidelberg where he met the exiled English royalist community at the court of Elizabeth, Queen of Bohemia. The introduction to the edition gives detailed consideration to the political, religious, and personal affiliations of the Bargraves, a prominent Kentish family, with special reference to their experiences of overseas travel. While abroad, Robert also twice met up with his cousin, John Bargrave (c. 1610-80), the noted traveller and antiquarian. The introduction also provides an assessment of the historical, literary, and geographical importance of Robert Bargrave’s journey; a survey of his extensive musical and dramatic interests; and the first detailed account of the provenances of both MS Rawlinson C 799 and now a lost earlier draft of this journal, identified here as the Eastry Court Manuscript. The edition includes seventeen illustrations, Bargrave family trees, and a selective bibliography of primary and secondary sources consulted.