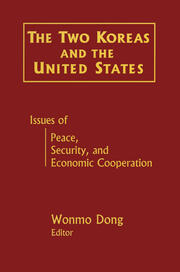 As Korea enters a hopeful new chapter in its history, this timely book, with contributions by distinguished experts in the field, addresses the fragility of the political, economic, and military balance within the two Koreas and in Northeast Asia. It provides in-depth analysis of the principal factors that gave rise to the persisting Cold War on the Korean peninsula, and successfully unravels many aspects of the complicated domestic and economic dynamics of the two Koreas, the patterns of relationship between the two rival states, as well as their changing relationships with the United States and other major powers.

This text studies the attitudes of the founding "fathers" toward slavery. Specifically, it examines the views of Thomas Jefferson reflected in his life and writings and those of other founders as expressed in the Northwest Ordinance, the Constitutional Convention and the Constitution itself, and the fugitive slave legislation of the 1790s. The author contends: slavery fatally permeated the founding of the American republic; the original constitution was, as the abilitionists later maintained, "a covnenant with death"; and Jefferson's anti-slavery reputation is undeserved and most historians and biographers have prettified Jefferson's record on slavery.