The US Military
A Basic Introduction 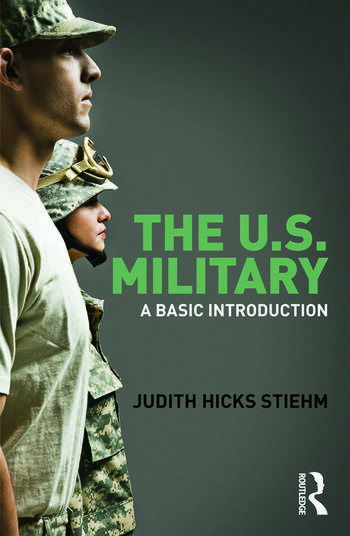 The US Military: A Basic Introduction

This book provides a basic guide to the US military and will raise questions for further discussion by students and other curious readers.

The US Military provides an accessible starting-point for those with a limited knowledge of this institution. Covering a wide range of subject matter, and ending with an extensive list of suggested resources to aid individual study and research, the text is divided into the following chapters:

This book will be of great interest to students of the US military, US politics, defense studies, and war and conflict studies, and will also be of relevance to journalists, NGO staff and diplomats.

1. Introduction  2. The A, B, Cs  3. Strategy and Doctrine  4. The Military in Action  5. Weapons and Capabilities  6. The Budget  7. Policy Questions for Citizens  8. Some Sources for More Information

Judith Hicks Stiehm is Professor of Political Science at Florida International University. She is author of several books on the military and recently served as Distinguished Visiting Professor at the U.S. Air Force Academy.

'Judith Stiehm's book is masterly. It is based on decades of working within the military system, yet somehow speaks cogently and clearly to general audiences. At a time when war is more complex than ever, yet fewer Americans come into contact with the armed forces than at any other time in our modern history as a nation, the timing for this great read could not be better either.' - Michael O'Hanlon, Brookings Institute, Washington DC

'Many of us know more about the lingo, actors, strategies of our favorite football team than we do about those of our country's military. Judith Stiehm has given us here a straightforward, demystifying guide to the US military. Reading it will enable us to be more effective citizens.' - Cynthia Enloe, Clark University

'Judith Stiehm offers readers a primer on the U.S. military, which explores various dimensions of the armed services, describes the tools of war (and peace), and poses fundamental questions on the U.S. military and society.' - Derek Reveron, US Naval War College

"The military is central to America's global role but very few Americans have first or even second-hand knowledge about military matters. This book bridges that gap better than any I have seen. It is a classic primer, covering the basics and providing a guided tour that will benefit any and every citizen. Stiehm has great command of her material and conveys it in a remarkably readable and informative fashion." -Peter Feaver, Duke University

'Anyone interested in learning about the US military and its customs, structure, and capabilities should read this book. Doing so will give the reader the ability to participate in a meaningful way in debates about the proper role of the armed forces in our society. A must read for scholars, policymakers, students, and citizens.' - Lawrence J. Korb, Center for American Progress

'Stiehm brings the kind of clarity to the U.S. military that is invaluable to students and scholars who study the military, to journalists who cover military matters from Coronado to Kandahar, and to every citizen who seeks to understand what a yearly budget of over $500 billion buys.’ - Carol Burke, University of California, Irvine

'This compact book provides a primer for debates and discussions about the proper nature and use of the US military... Summing Up: Recommended. All readership levels.' - M. A. Morris, Clemson University, CHOICE