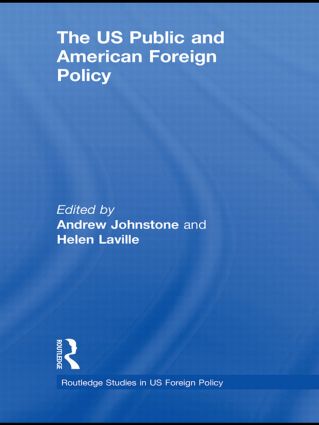 Though often overlooked, public opinion has always played a significant role in the development and promotion of US foreign policy and this work seeks to comprehensively assess the impact and nature of that opinion through a collection of historical and contemporary essays.

The volume evaluates the role of organizations and movements that look to represent public opinion, and assesses the nature of their relationship with the government. The contributors utilize a number of different approaches to examine this impact, including polling data, assessments of the role of the media, and the wider consideration of ideas and ideology, moving on to examine the specific role played by the public in the policy making and policy promotion process.

Engaging with new questions as well as approaching old questions from a new angle, the work argues that whilst the roles change, and the extent of influence varies, the power of the public to both initiate and constrain foreign policy clearly exists and should not be underestimated. This work will be of great interest to all those with an interest in American foreign policy, American politics and American history.

1. Introduction Andrew Johnstone and Helen Laville Section One: The Public and War 2. From Coast Defence to Embalmed Beef: The Influence of the Press and Public Opinion on McKinley’s Policymaking during the Spanish-American War Joseph Smith 3.To Mobilize a Nation: Citizens Organizations and Intervention and on the Eve of WWII Andrew Johnstone 4. Power to the People? American Public Opinion and the Vietnam War Andrew Priest Section Two: Public Interests and Ideology 5. Organized Labor and the Social Foundations of American Diplomacy, 1898-1920 Rhodri Jeffreys-Jones 6. Religion and World Order at the Dawn of the American Century Andrew Preston 7. Gender Apartheid? American Women and Women’s Rights in American Foreign Policy Helen Laville Section Three: Interests and Ethnicity 8. African Americans and US Foreign Policy: The American Negro Leadership Conference on Africa and the Rhodesian Crisis Carl P. Watts 9. The American Public and the US-Israeli "Special" Relationship Elizabeth Stephens 10. The Cuban Lobby and US Policy toward Cuba Jessica Gibbs Section Four: The Public and the War on Terror 11. Neoconservatism and the American Public: Was 9/11 a Hegemonic Moment? Maria Ryan 12. "You Don’t Launch a Marketing Campaign in August": The Bush Administration and the Public Before and After the Iraq Invasion Scott Lucas

Andrew Johnstone is a Lecturer in American History at the University of Leicester. He is the author of Dilemmas of Internationalism, and his research focuses on US internationalism, and the relationship between the state and private spheres in mobilising support for US foreign policy.

Helen Laville is a senior lecturer in American History at the University of Birmingham. She has published widely on women's rights in the Cold War Years, including the monograph Cold War Women (2002). She is currently writing a book on American women in the Civil Rights movement.