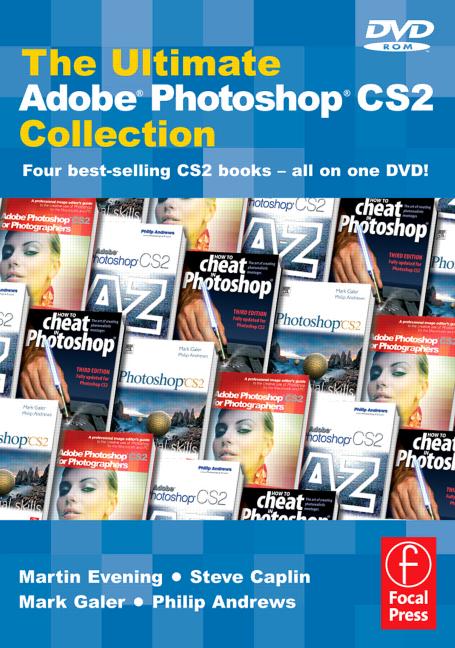 Martin Evening is a professional photographer and digital imaging consultant, an experienced Photoshop user and key demo artist for Adobe. Based in London, UK, Martin was inducted into the legendary Photoshop Hall of Fame in 2008.
Steve Caplin is a freelance artist and author working in London, England. His satirical photomontage work is commissioned by newspapers and magazines around the world, including The Guardian, The Independent, The Sunday Telegraph, The Sunday Times Magazine, Radio Times, Readers Digest and L'Internazionale. Steve has worked for advertising agencies including Saatchi & Saatchi, Bartle Bogle Hegarty and Lowe Howard Spink, and his work has won two Campaign Poster Awards and a D&AD Pencil award. He has lectured widely in England, Norway, France and Holland, and has taught digital design at the University of Westminster and the University of the Arts London. Steve is the author of ten books: How to Cheat in Photoshop (five editions), How to Cheat in Photoshop Elements (co-authored, three editions), Icon Design, Max Pixel's Adventures in Adobe Photoshop Elements, The Complete Guide to Digital Illustration (co-authored) and Art & Design in Photoshop. He has also co-authored three mainstream books: Dad Stuff, More Dad Stuff, Stuff the Turkey and Complete and Utter Zebu. When he's not at his computer Steve plays the piano well, the accordion moderately and the guitar badly. He spends his spare time making improbable constructions out of wood and other materials. His first commissioned sculpture was for the Bethlem hospital - the original 'bedlam' - in 2010.
Mark Galer is the Program Director and Senior lecturer at RMIT University in the School of Media and Communication, Australia. He is also co-writer of their popular online photography courses. He has lectured in photography in the UK and Australia and has worked commercially as a freelance photographer on corporate and editorial assignments. He has written numerous top-selling photography books, including Photography Foundations for Art & Design, the Popular Photoshop Elements; Maximum Performance and Photoshop; Essential Skills series. He is an Official Adobe Ambassador for Photoshop and Photoshop Elements.
Philip Andrews is Adobe Australia's official Photoshop and Elements Ambassador. He is an experienced photographer, author, magazine editor and online course creator. He was previously a lecturer at the Queensland School of Printing and Graphic Arts, Australia and Nescot, England. He is a beta tester for Photoshop, an alpha tester for Photoshop Elements and a Photoshop specialist demonstrator for Adobe Australia. Contributing numerous articles and videos to AdobeTV and the inspirational browser, Philip is a leading source in adobe information and instruction. Philip is also co-founder of photo-college.com an online photography training college. He's a regular contributor to several magazines including Shutterbug, Amateur Photographer, Australian Photography and Better Photography, he is senior contributing editor for Better Digital, columnist for What Digital Camera and Co-editor and publisher of Better Photoshop Techniques magazine.

"The price point you have indicated would certainly be something I would snap up as a professional, and I think you would get a lot of takers in the amateur and training markets" - Stuart Nielsen-Marsh, Adobe and Wacom Trainer and Professional Photographer