The Underground Railroad
An Encyclopedia of People, Places, and Operations 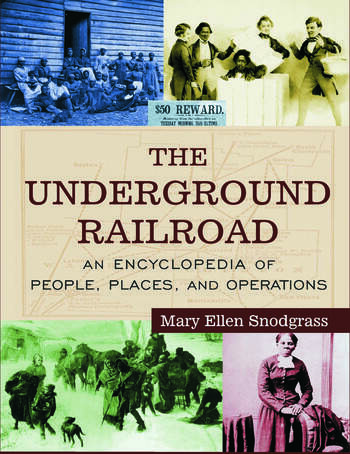 The Underground Railroad: An Encyclopedia of People, Places, and Operations

The culmination of years of research in dozens of archives and libraries, this fascinating encyclopedia provides an unprecedented look at the network known as the Underground Railroad - that mysterious "system" of individuals and organizations that helped slaves escape the American South to freedom during the years before the Civil War. In operation as early as the 1500s and reaching its peak with the abolitionist movement of the antebellum period, the Underground Railroad saved countless lives and helped alter the course of American history. This is the most complete reference on the Underground Railroad ever published. It includes full coverage of the Railroad in both the United States and Canada, which was the ultimate destination of many of the escaping slaves. "The Underground Railroad: An Encyclopedia of People, Places, and Operations" explores the people, places, writings, laws, and organizations that made this network possible. More than 1,500 entries detail the families and personalities involved in the operation, and sidebars extract primary source materials for longer entries. This encyclopedia features extensive supporting materials, including maps with actual Underground Railroad escape routes, photos, a chronology, genealogies of those involved in the operation, a listing of Underground Railroad operatives by state or Canadian province, a "passenger" list of escaping slaves, and primary and secondary source bibliographies.

As the Seattle protests over the formation of the WTO showed all too clearly, there is a strong need for in-depth understanding of how the globalization of the world economy is affecting the economic, political, and social development of the individual nation-states. This book provides a detailed and authoritative examination of the on-going issues related to globalization, such as the increasingly unfair distribution of the world's resources, and how this phenomenon is involving wildly disparate countries. While the main focus of the book is the United States, with its flexible markers, wide social differences, and its breath-taking level of economic expansion, extensive attention is also given to the other major players, including the European Union and those central and eastern European nations who very much want to become member countries, as well as China, India, Japan, Russia, and Southeast Asia.