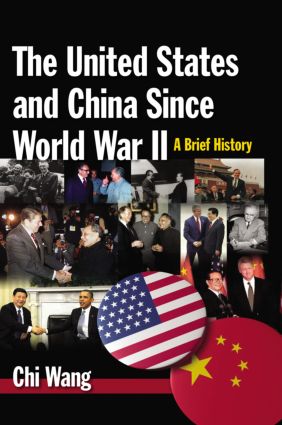 The United States and China Since World War II: A Brief History

This book surveys the complicated history of U.S.-Chinese relations. After two brief chapters providing historical context, the focus shifts to the mid-twentieth century, the wartime alliance, the war's bitter aftermath, and the decades since World War II, including the path from normalisation to China's hosting of the 2008 Summer Olympics. The author traces the ways in which the two countries have managed the blend of common and competitive interests in their economic and strategic relationships; the shifting political base for Sino-American relations within each country; the emergence and dissolution of rival political coalitions supporting and opposing the relationship; the evolution of each society's perceptions of the other; and ongoing differences regarding controversial topics like Taiwan and human rights.

The author's early years in China, American education, and career as a China expert and an advisor on U.S.-China relations and cultural affairs for over fifty years, have afforded him unique opportunities to observe and participate in the development of this important relationship.

"An intimate of policy-makers on both sides of the Pacific, Dr. Chi Wang has helped mold Sino-U.S. relations for almost 50 years. His new work on the modern history of the world's most important bilateral relationship will command the attention of scholars and practitioners in China and the United States. Dr. Wang's comprehensive and balanced analysis provides the insight of someone who has lived his subject matter." --Ambassador James Sasser, U.S. Ambassador to China, 1995-1999

"The U.S.-China relationship has been exceptionally turbulent, complex, and controversial, yet Chi Wang manages in a brief two-hundred pages to render it with remarkable balance, thoroughness, and objectivity. This is not only a book to recommend to those seeking an introductory understanding of the most consequential relationship of the twenty-first century, it is one that those expert in this history will also find rewardingly informative and enjoyable to read." --Ambassador Charles W. Freeman, Jr., U.S. Ambassador to Saudi Arabia, 1989-1992, and U.S. Assistant Secretary of Defense for International Security Affairs, 1993-1994

"Chi Wang's The United States and China is a well-written, comprehensive account of bilateral relations since World War II. This volume will find an honored place on the bookshelves of scholars, students, and informed citizens alike. He concludes his book by wisely pointing out that productive U.S.-China ties require America getting its own house in order as one of the important steps both sides must take." --David M. Lampton, Johns Hopkins SAIS

"This brief and accessible history of U.S.-China relations since the end of World War II lays out succinctly the tortured path that has brought this vitally important relationship to its current state. The author, Dr. Chi Wang, headed the Chinese section of the Library of Congress for many years and has applied his firsthand knowledge of both countries to crafting this concise account of Sino-U.S. interactions over the last seven decades. He provides in this slim volume essential background for understanding the challenges that lie ahead for the United States in dealing with China's growing prominence on the world stage." --Ambassador J. Stapleton Roy, U.S. Ambassador to China, 1991-1995

"Capping a remarkable career of five decades involving personal interaction with many of the scholars and practitioners on both sides of the Pacific, Dr. Wang once again deepens our understanding of the evolving Sino-American relationship." --Robert Sutter, George Washington University