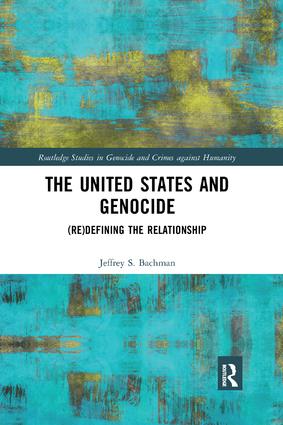 The United States and Genocide

The analysis is situated within the broader genocide studies literature, while emphasizing the role of state responsibility for the commission of genocide and the crime’s ancillary acts. The book addresses how a culture of impunity contributes to the resiliency of the dominant narrative in the face of considerable evidence that challenges it. Bachman’s narrative presents a far darker relationship between the US and genocide, one that has developed from the start of the Genocide Convention’s negotiations and has extended all the way to present day, as can be seen in the relationships the US maintains with potentially genocidal regimes, from Saudi Arabia to Myanmar.

This book will be of interest to scholars, postgraduates, and students of genocide studies, US foreign policy, and human rights. A secondary readership may be found in those who study international law and international relations.

"This book…reopens the academic debate on a relatively under-researched question: the role of the United States in the perpetration and prevention of mass violence and more specifically genocide. Very critical of the American authorities, the book is nonetheless based on a solidly argumentation and, in the end, is quite convincing."- Julien Zarifian, Politique Americaine, 2018

1. Introduction: (Re)Contextualizing the US Relationship with Genocide

4. Conspiracy to Commit Genocide in Indonesia

5. Complicity in Genocide in Bangladesh and Guatemala

6. A History of Genocide in Iraq

8. Again and Again: The US Relationship with Genocide

Jeffrey S. Bachman is Professorial Lecturer in Human Rights and Director of the Ethics, Peace, and Global Affairs MA Program at the American University's School of International Service, USA.