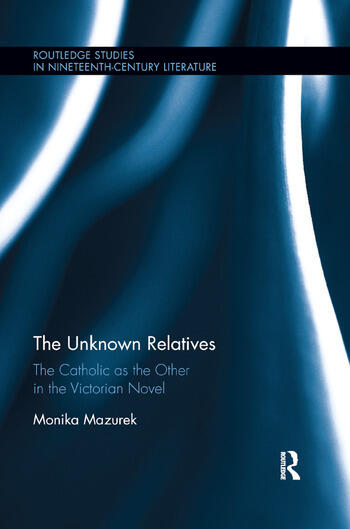 The Unknown Relatives: The Catholic as the Other in the Victorian Novel

The Unknown Relatives analyses a large body of Victorian literary texts dealing with the topic of Catholicism and Catholics, written from the non-Catholic perspective. The readings of these texts are inspired by psychoanalytic criticism, primarily by the work of Freud and Kristeva. Kristeva’s work on abjection, the paradoxical repulsion mixed with attraction, provides the framework for the first part of the book, which argues that Victorian depictions of Catholicism exhibit the same mixture of fascination and attraction. The second part of the book is constructed largely around Freud’s idea of the uncanny, showing how Catholicism was cast in the role of the archaic religion, profoundly strange and yet at the same time somehow familiar. The book includes the readings of a number of Victorian authors, both canonical (Charlotte Brontë, William Thackeray, Charles Dickens) and lesser-known ones (George Borrow, John Shorthouse, Mrs Humphry Ward). The book will be of interest to scholars of cultural, literary and religious studies, as well as to readers interested in the matters of religion in literature and religious prejudice.

2. After the Act of Emancipation: the position of Catholics in England in the Victorian era

3. Abjection and Catholicism: the dynamic of revulsion and attraction in Protestant depictions of

4. Perverts to Rome: Catholicism as a threat to gender roles and the Protestant family

5. The uncanny: the familiarity of Roman Catholicism and the foreignness of Anglo-Catholicism

6. Liberty and progress or authority and respect: the conflict of values in the historical novel

Monika Mazurek is a Professor of English Literature at the Pedagogical University in Krakow, Poland.