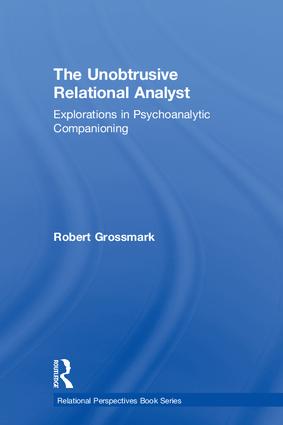 Psychoanalysts increasingly find themselves working with patients and states that are not amenable to verbal and dialogic engagement. Such patients are challenging for a psychoanalytic approach that assumes that the patient relates in the verbal realm and is capable of reflective function. Both the classical stance of neutrality and abstinence and a contemporary relational approach that works with mutuality and intersubjectivity, can often ask too much of patients.

introduces a new psychoanalytic register for working with such patients and states, involving a present and engaged analyst who is unobtrusive to the unfolding of the patient’s inner world and the flow of mutual enactments. For the unobtrusive relational analyst, the world and idiom of the patient becomes the defining signature of the clinical interaction and process. Rather than seeking to bring patients into greater dialogic relatedness, the analyst companions the patient in the flow of enactive engagement and into the damaged and constrained landscapes of their inner worlds. Being known and companioned in these areas of deep pain, shame and fragmentation is the foundation on which psychoanalytic transformation and healing rests.

In a series of illuminating chapters that include vivid examples drawn from his work with individuals and with groups, Robert Grossmark illustrates the work of the unobtrusive relational analyst. He reconfigures the role of action and enactment in psychoanalysis and group-analysis, and expands the understanding of the analyst’s subjectivity to embrace receptivity, surrender and companioning. Offering fresh concepts regarding therapeutic action and psychoanalytic engagement, The Unobtrusive Relational Analyst will be of great interest to all psychoanalysts and psychoanalytic psychotherapists.

"The Unobtrusive Relational Analyst draws on the history of psychoanalysis so as to create its bright future. In its pages the contributions of Freud and British Object Relations theory open to the Relational Turn and to a model of 21st century practice that is integrative and innovative. Through multiple, extended vignettes Grossmark illustrates his clinical position of gentle presence with a remarkable openness and clarity, emphasizing the role of action in the talking cure and the importance of engagement in a process that takes patient and analyst, and will also take the reader, to undiscovered areas of psychic life and living. If this sounds different and new to you, you’re right, it is! Transcending parochial divisions, Grossmark creates from varied facets of analytic theory an elegant and eloquent original synthesis that is at once ‘in the tradition’ and its forward edge."-Bruce Reis, Ph.D., NYU Postdoctoral Program in Psychotherapy and Psychoanalysis, & the Institute for Psychoanalytic Training and Research.

"In this wonderfully innovative book, Robert Grossmark shows us how to work with the most difficult patients we encounter, those whose words are empty, whose feelings are dead and who are unable to relate as whole objects or to make a life they can own. Calling on a wide variety of theories from many different schools of thought, Grossmark has woven a conceptual net that captures his unique way of "companioning" these people whom he describes in such loving and dramatic detail. A companion is someone who travels along with you and shares your bread. I can think of no better companion for a deep psychoanalytic voyage than Robert Grossmark. This book should be a must read for anyone who works with these challenging patients."-Sheldon Bach, Ph.D., Adjunct Clinical Professor of Psychology, New York University Postdoctoral Program in Psychoanalysis; Fellow, International Psychoanalytical Association.

"Grossmark's original formulations about the therapeutic presence required of the analyst who meets primitive unformulated and unspeakable self-states in his patients, reverberate in the consulting room long after reading. His clinical work is moving in its great receptivity, and inspiring freedom from the conventions of psychoanalytic technique of whatever school. For me, it courageously illustrates the radical attitude required of an analyst who truly leans on Bion's act of faith and on Winnicott's 'living an experience together."-Michal Rieck, Training and Supervising Analyst, the Israel Psychoanalytic Society; Co-Founder and Co-Direcor, The Israel Winnicott Center, Tel Aviv.

Prologue; Introduction; Part One: Psychoanalytic Process Chapter 1. The Unobtrusive Relational Analyst Chapter 2. The Flow of Enactive Engagement Chapter 3. Psychoanalytic Companioning Chapter 4. The Eloquence of Action: Unobtrusive Psychoanalytic Companioning and the Growth of Mind and Self Chapter 5. Enactment: The Total Situation Chapter 6. Everything Happens at Once: The Emergence of Symmetric Enactment Chapter 7. The Work of the Narrative and Enactive Co-narration Part Two: Group Analysis Chapter 8. The Edge of Chaos: Enactment, Disruption and Emergence in Group Psychotherapy Chapter 9. Narrating the Unsayable: Enactment and the Creation of Meaning in Group Psychotherapy Chapter 10. The Unobtrusive Relational Group Analyst and Enactive Co-Narration

Robert Grossmark is a psychoanalyst working with individuals, couples and groups in New York City. He is Adjunct Clinical Professor and Consultant at the The New York University Postdoctoral Program in Psychoanalysis and Psychotherapy. He teaches at The National Institute for the Psychotherapies; the Clinical Psychology Doctoral Program at The City College of New York and the Eastern Group Psychotherapy Society.