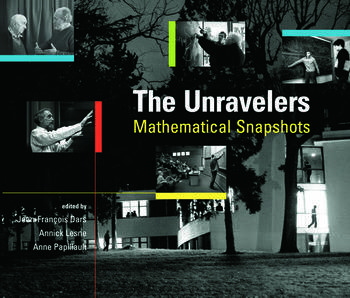 Through revealing photographs and accompanying text, this book offers an enchanting and beautiful glimpse into the inner life of the Institut des Hautes Études Scientifiques (IHES). The IHES in France is an institute of advanced research in mathematics and theoretical physics with an interest in epistemology and the history of science. It provides exceptionally gifted scientists with a place where they can devote themselves entirely to their research, free of teaching and administrative constraints, and offers them the opportunity to invite visitors with whom they wish to work.

The book is a window on the inner life of the The Institut des Hautes Études Scientifiques (IHES), an institute of advanced research in mathematics and theoretical physics. [The editors] utilize candid photographs and commentary from and exchanges with the researchers themselves to depict the IHES environment and the work conducted in the unique institute.
—Reference & Research Book News, February 2009

I often want to show my students what the people we talk about looked (or look) like, but it is often frustrating and difficult to find good photographs of mathematicians, and even harder to get information about when they were made, and by whom. This is one of the things that makes books like this one valuable: here are some of the big names, and we know exactly where and when the photos were taken. Historians, in particular, will find this valuable. Most of all, however, these expressive photos of mathematicians and theoretical physicists doing what they do are a beautiful record of the life of a place and of the people who go there.
—Fernando Q. Gouvêa, MAA Reviews, February 2009

It is a hymn to this little paradise for very brilliant people, called IHES, a very special center of mathematical research of the highest order . . . By showing visitors from all over teh world, the album also shows how much the world of mathematics has become global . . . This charming little book can keep us dreaming of the excitement of science.
—Jean-Michel Kantor, The Mathematical Intelligencer , July 2009

The Institut des Hautes Etudes Scientifiques in France is an institue of advanced research in mathematics and theoretical physics. This book contains snapshots of its scientists and visitors, [all of whom] contributed a little essay on subjects from mathematics to philosophy. ... [It] can serve as a recreational read for anyone.
—EMS Newsletter, December 2009

This book is recreational, insightful, and pleasant. ... I can easily see sharing parts with my students to help them see through this small window when they ask, 'Where will we use this?' The small bits I have shared have sparked more interest in mathematics as a field instead of just a doorway into engineering or other scientific interests. I recommend this book to teachers and students.
—Allen Jacobson, Mathematics Teacher, March 2010