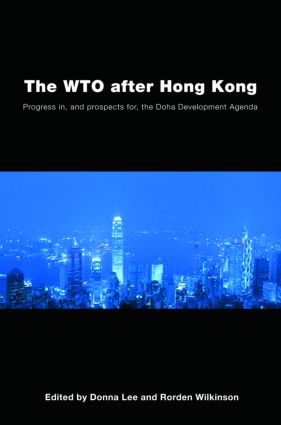 The WTO after Hong Kong

Progress in, and Prospects for, the Doha Development Agenda, 1st Edition

After the World Trade Organization’s (WTO) critical December 2005 Hong Kong ministerial meeting, negotiations to implement the Doha Development Agenda (DDA) broke down completely in the summer of 2006. This book offers a detailed and critical evaluation of how and why the negotiations arrived at this point and what the future holds for the WTO.

It brings together leading scholars in the field of trade from across the social sciences who address the key issues at stake, the principal players in the negotiations, the role of fairness and legitimacy in the Doha Round, and the prospects for the DDA’s conclusion.

The WTO after Hong Kong is the most comprehensive account of the current state of the World Trade Organization and will be of enormous interest to students of trade politics, international organizations, development and international political economy.

Bringing together key scholars in a wide range of fields, Donna Lee and Rorden Wilkinson have constructed a valuable resource for those thinking about the immediate future of the multilateral trading regime. Examining the Doha Development Round from a number of perspectives, the negotiation's difficulties are both contextualised and clearly explained; this is a valuable corrective to the usual myopic presentation of the current 'crisis' at the WTO. - Christopher May, Lancaster University, UK

Lee and Wilkinson have put together a classic edited volume on where the Doha Development Agenda stands after Hong Kong. The authors are eminent; the material is up-to-date; the range of coverage is wide; the analysis is serious. The result is an indispensable account of important events for all who struggle to follow what is going on within the WTO. - Anthony Payne, University of Sheffield, UK

This book is well written and accessible, and it will give readers a better understanding of the Doha Round negotiations, in terms of both substance and dynamics. The increasing assertiveness of the "Global South" – an important new feature of this Round – is particularly well documented. The expert contributions also contain many useful suggestions on how the DDA might deliver greater gains to poor members of the WTO. - Supachai Panitchpakdi, Secretary-General of UNCTAD, Director-General of the WTO 2002-2005

With the apparent collapse of the Doha development round, even those who follow the WTO reasonably closely find themselves in need of information and analysis. This excellent collection should be the first stop. The essays, written by major experts in the field, cover all the main topics and cover them well. Given the amount of political heat in the immediate aftermath of the breakdown, most of the essays are refreshingly free from special pleading and seem focused on providing a practical understanding of the barriers to forward movement and potentialities (limited though they are) for finding ways to move forward. I heartily recommend this book to economists, political scientists, and interested observers in general. - Douglas R. Nelson, Tulane University, New Orleans, USA