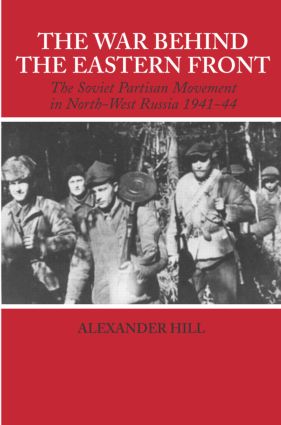 The War Behind the Eastern Front

This book is based on Soviet archival sources, most previously untapped by Western and Soviet and post-Soviet Russian historians, in addition to German material from the US National Archives. Using this material the author describes the harsh realities of partisan warfare and explains the changing fortunes of the Soviet partisan movement on the territory of north-western Russia occupied by the German Army Group North between 1941 and 1944. The author argues that after the virtual annihilation of the partisan movement of 1941, during the period from spring 1942 to autumn 1943, despite improvements in partisan combat effectiveness, ruthless German anti-partisan policies, in combination with other measures described, prevented the partisan movement from achieving results hoped for by its leadership. From the autumn of 1943 the prospect of a scorched earth policy in retreat by a German Army clearly on the run, in combination with the military development of the partisan movement and effective propaganda aimed at the civilian population and military collaborators, provided the foundations for increased partisan success. The author concludes that despite not living up to contemporary expectations, or, for much of the war, to the claims of Soviet post-war accounts, the Soviet partisan movement was nonetheless, for the Soviet government, a cost effective means of hitting the German war machine in the context of the Soviet war effort as a whole and in particular the horrendous loss of life at the front.

'The detailed documentation and analysis of his work adds much to the debate on the effectiveness of the partisan movement and civil life behind the lines, which has hitherto been argued without benefit of Russian archival material.' - Slavic Review

'Hill's work provides new insights into the specific nature and structure of the Soviet partisan movement in northwest Russia.' - The Journal of Military History

After attending Queen Katherine School, Kendal, Cumbria, Alexander Hill gained a place to read History at Peterhouse, University of Cambridge. From the University of Cambridge he gained both his BA and doctorate, which forms the basis for this work. Whilst preparing his thesis he learnt Russian and spent nearly two years working in Russia. He is currently Temporary Lecturer in Contemporary Russian History at the School of Slavonic and East European Studies, University College London.