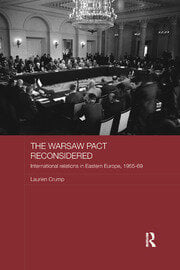 The Warsaw Pact is generally regarded as a mere instrument of Soviet power. In the 1960s the alliance nevertheless evolved into a multilateral alliance, in which the non-Soviet Warsaw Pact members gained considerable scope for manoeuvre. This book examines to what extent the Warsaw Pact inadvertently provided its members with an opportunity to assert their own interests, emancipate themselves from the Soviet grip, and influence Soviet bloc policy. Laurien Crump traces this development through six thematic case studies, which deal with such well known events as the building of the Berlin Wall, the Sino-Soviet Split, the Vietnam War, the nuclear question, and the Prague Spring. By interpreting hitherto neglected archival evidence from archives in Berlin, Bucharest, and Rome, and approaching the Soviet alliance from a radically novel perspective, the book offers unexpected insights into international relations in Eastern Europe, while shedding new light on a pivotal period in the Cold War.

Laurien Crump is Assistant Professor in the History of International Relations at the University of Utrecht, The Netherlands

"The Warsaw Pact Reconsidered offers us an original and nuanced insight into what had been previously understood to be a mere instrument of Soviet domination. This book demonstrates the fallacy of this supposition, using a detailed and very impressive body of multi-archival data. The author reveals the extent to which the Pact was disrupted by internal turmoil, disagreements, tensions and the downright incompatibility of preferences, all of which rendered the organisation, at times, barely coherent. Indeed, so revealing are some of the details the book provides, that it may not be far-fetched to say that it will transform our understanding of the functioning of the Soviet bloc, certainly from the security perspective. Moreover, The Warsaw Pact Reconsidered is a thoroughly pleasurable read. At times, it resembles a political thriller, enticing the reader to work through it at a cracking pace. The book certainly deserves a wide audience insofar as it offers insights that go well beyond those which might typically be expected from a book on the defunct security alliance. While all the books submitted for the 2015 Blazyca Prize were strong contenders for one reason or another, the judges readily agreed that Laurien Crump’s fine monograph was a worthy winner."

Prof Kataryna Wolczuk (University of Birmingham) Prof Stephen Hutchings (University of Manchester) The George Blazyca Prize for scholarly work of high quality in East European studies was established by decision of the annual general meeting of the Association in April 2006 in recognition of the outstanding contribution to its field of study made by the late George Blazyca.

"Where many historians work towards the eventual demise of the alliance in 1991, often weak spots and negative developments be emphasized, Crump aims at a non-teleological analysis of the internal dynamics at the time of the first fourteen years of existence a knocked out KNIL soldier in the Javanese Kendal that arbitrary people shot, and other excesses, both large if scattered on a small scale the different combat zones."