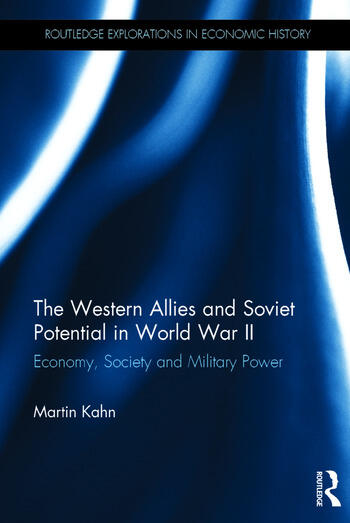 World War II was the largest and most devastating war in modern history with far-reaching consequences. The single most important campaign was the Soviet–German war, which consumed the lion share of Germany’s military resources. In contrast to the tone in German and Anglo-American precampaign assessments, the USSR ws able to repulse the invasion after huge losses and turn the table on Germany and her minor Axis allies.

This book examines how the two most important Western Allies in World War II, the United States and the United Kingdom, assessed the economic and military potential of the Soviet Union in 1939–1945. Since the USSR was the single most important military contributor to the Allied victory in Europe, and the main target of Germany’s military strength, these assessments are of paramount importance in order to understand how the Anglo-Americans perceived the overall war situation and adjusted their own war effort in accordance with it. Utilising a wide range of documents produced by the Anglo-Americans during and shortly before World War II, this book explores why Soviet strength was underestimated, and how the Soviet economic system, Soviet society and military capabilities were viewed by Western Government observers.

The Western Allies and Soviet Potential in World War II is a fascinating read for those in academia studying economic history, international economics and security studies, especially areas on military and strategic.

1.2 War potential and the general purpose of this study

2 The Anglo-American assessments in a wider context

2.1 The US and British government organizations responsible for assessing the USSR

2.2 The origins, analysis and dissemination of information

2.3 The assessment’s reliability and the selection of reports for this study

2.4 The reality and contemporary perceptions of war potential

3 The Soviet Union and the West: The pre-war experience and international Great Power politics before World War II

4 From the guarantee to Poland to the Molotov-Ribbentropp pact

4.1 British anguish: The value of the Soviet Union as an ally and the "gathering storm" in Europe

4.2 Soviet war potential and the possible inclusion of the USSR in a "peace front"

4.3 The Soviets propose an alliance

4.4 Assessments on the eve of the Moscow negotiations

5.1 The economy and its military potential

5.2 The size and efficiency of the armed forces

6 The Molotov-Ribbentrop pact and its consequences

6.2 The USSR as a potential military adversary

6.4 Assessments regarding the economy during the autumn

6.6 Assessments connected to the Soviet–Japanese conflict

7.2 The economy and the internal situation

8 Assessments running up to Barbarossa

8.1 The economy and internal stability

8.2 The production and quality of munitions

Martin Kahn  is a Swedish economic historian. He is a docent (associate professor) affiliated with the Department of Economy and Society at the University of Gothenburg, Sweden.