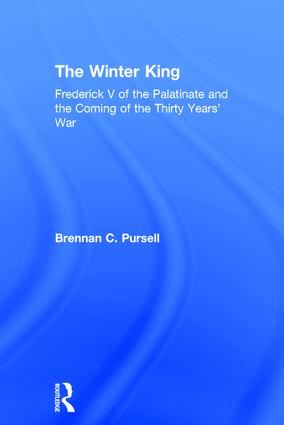 Frederick V of the Palatinate and the Coming of the Thirty Years' War, 1st Edition

Elector Palatinate Frederick V - the Winter King - would be an insignificant figure in the history of Europe were it not for the tremendous conflagration that he helped to ignite. Frederick’s conflict with Holy Roman Emperor Ferdinand II over the throne of Bohemia plunged Europe into thirty years of savage violence, fiery devastation, and terrible privation during the first half of the seventeenth century. More than simply a biographical study of Frederick, The Winter King provides a fresh and compelling study into the causes of the Thirty Years’ War. Examining the early stages of the war through the locus of Frederick, it reconciles the forces of confession, conscience and constitutionalism that affected Frederick’s decision making at critical junctures throughout the crisis. By placing constitutionalism rather than religion at the centre of events, it offers a subtle yet convincing new account of the conflict. Drawing on political and personal correspondence, backed up with a wealth of archival and secondary sources, Dr Pursell presents Frederick’s choices and alternatives and interprets his words and responses to them. Considering the war from Frederick’s perspective he argues convincingly that the war is best understood not simply as a struggle between Protestant and Catholic powers, but rather as an extended constitutional conflict, entwining religious and political factors, fought within the Holy Roman Empire.

'This is a terrific book, unusually wide-ranging and well-written, that held my attention throughout. Pursell seems to have read absolutely everything in every archive, every published work, and every language. A glance at his list of sources is enough to make even experienced researchers faint! Although several biographies of Frederick have been published, this one will surely prove definitive.' Professor Geoffrey Parker, Ohio State University '… will undoubtedly become the standard account for generations of a figure who influenced significantly the course of the Thirty Years' War.' Renaissance Quarterly '… a thoroughly researched and intelligent study that unquestionably breaks new ground.' Reviews in History 'The Winter King reflects a maturity characteristic of the work of a distinguished senior scholar.' Seventeenth Century News 'Pursell's survey provides a valuable and methodologically sound analysis of the causes of the Thirty Years' War. It also greatly improves on earlier monograph studies of Frederick of the Palatinate and stands as the best available 'biography' of the Elector Palatine, Bohemian King and exile in the Netherlands.' Acta Comeniana 'This rich, multifaceted study […] will become the standard biography of this stubborn, deeply religious, but often obtuse man… Diplomatic historians and historians of Central Europe will particularly appreciate this little gem, the insights the author offers, and the often telling anecdotes.' ' The Historian

Contents: Preface; Introduction: Frederick V and the Thirty Years' War; Signs of Impending disaster?: The imperial constitution; The protagonist: Frederick V; The Palatinate in a European context; An inevitable religious war?; Rebellion in Bohemia: a local crisis: Ferdinand of Styria, King of Bohemia; The uprising begins; Palatine involvement; The Anglo-Spanish nexus; The rebellion wavers; The Elections of 1619: an Imperial Crisis: Interregnum; The Palatine vote; The Bohemian and imperial elections; The final decision; Frederick I, King of Bohemia; The New King, 1619-20: The Palatine-Bohemian regime; The progress; A birth and a ban; The tide turns; The defense falters; The end of the regime; The Palatine Crisis, 1620-21: The rebellion collapses; Common cause and Protestant cause; Segeberg; The English dimension; The defense of the Palatinate; Digby's embassy; Between war and peace; Frederick at War, 1622: Palatine tactics; Rex pacificus; On campaign; English intercession; Steps toward peace; Violence prevails; The loss of the Palatinate; Undermining the Anglo-Spanish Peace, 1623: Palatine policy; The journey to Spain; The match dissolves; Yet another match; The Rise and Fall of the Hague Alliance, 1624-26: War or negotiations?; The quest for an alliance; Annus mirabilis, 1625; The Hague Alliance; The 'Catholic' side; Frederick and his God; Tragedy and Deliverance, 1627-32: The end of the Empire's wars; Frederick V; Ferdinand II; The Swedish invasion; The last campaign; Closure: To Westphalia; The problem of religious war; Frederick the man; Bibliography; Index.

Brennan C. Pursell is Assistant Professor of History at DeSales University, USA. He has published articles and book reviews for History, The Historical Journal, The Court Historian, The Sixteenth Century Journal, and the Royal Historical Society's Camden Fifth Series.