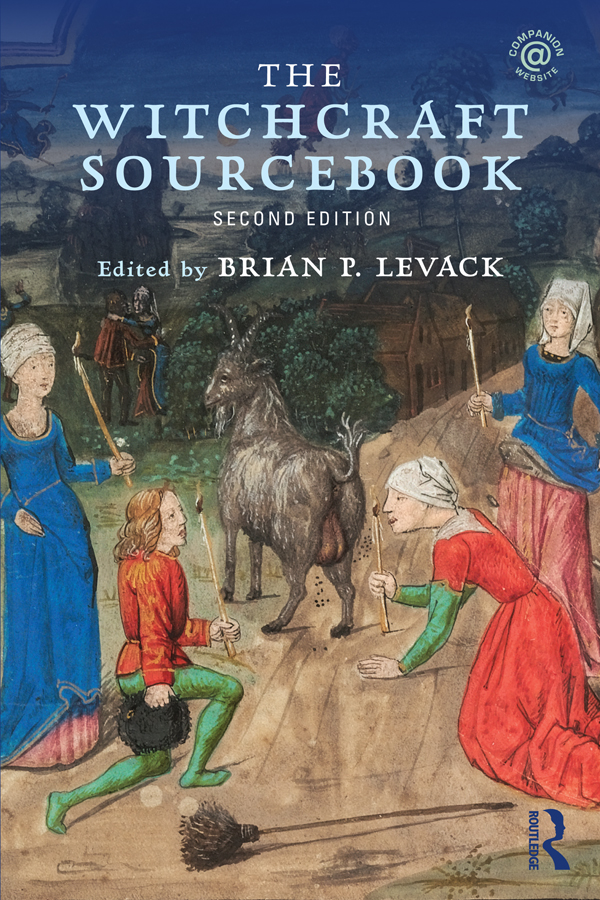 The Witchcraft Sourcebook, now in its second edition, is a fascinating collection of documents that illustrates the development of ideas about witchcraft from ancient times to the eighteenth century. Many of the sources come from the period between 1400 and 1750, when more than 100,000 people - most of them women - were prosecuted for witchcraft in Europe and colonial America. During these years the prominent stereotype of the witch as an evil magician and servant of Satan emerged. Catholics and Protestants alike feared that the Devil and his human confederates were destroying Christian society.

Including trial records, demonological treatises and sermons, literary texts, narratives of demonic possession, and artistic depiction of witches, the documents reveal how contemporaries from various periods have perceived alleged witches and their activities. Brian P. Levack shows how notions of witchcraft have changed over time and considers the connection between gender and witchcraft and the nature of the witch's perceived power. This second edition includes an extended section on the witch trials in England, Scotland and New England, fully revised and updated introductions to the sources to include the latest scholarship and a short bibliography at the end of each introduction to guide students in their further reading.

The Sourcebook provides students of the history of witchcraft with a broad range of sources, many of which have been translated into English for the first time, with commentary and background by one of the leading scholars in the field.

"To understand the history of witchcraft properly one has to read the original sources, and for this pursuit Brian Levack has produced the very best collection on the market. Wide-ranging and judiciously chosen, this is a volume that seasoned scholars and novice students alike will find fascinating and enlightening."

"This is a balanced and highly readable compilation of sources on witchcraft and the witch-hunts. The book is balanced in its inclusion of some classical and medieval antecedents, balanced in the use of various forms of source material (from demonological treatises, to sermons, to legal documents, to trial excerpts), and balanced in the geographical coverage of the topic. Readers also will appreciate the extensive descriptions and introductory notes that Levack provides to contextualize and nuance the material."

"The Witchcraft Sourcebook is an exceptional resource for understanding and teaching the history of the European witch-hunts, and a superb introduction for anyone who wants to encounter this topic directly through the voices of early modern people. New continental European and anglophone trial records enhance this edition, and Brian Levack’s introductory texts continue to provide a lucid explanatory framework by one of the world’s leading scholars of the witch-hunts."

"The Witchcraft Sourcebook provides both a means of entry and an impressive supporting structure to researchers interested in the development of ideas on witchcraft in Europe, up to the eighteenth century."

List of illustrations Preface to the First Edition Preface to the Second Edition Acknowledgments Introduction PART 1 Witchcraft and magic in the ancient world 1 The witch of Endor 2 A sorcery trial in the second century CE 3 Curse tablets against Roman charioteers 4 Apuleius: the power of witches 5 Horace: Canidia as a witch figure 6 Love magic in antiquity 7 St Augustine: demonic power in early Christianity PART II The medieval foundations of witch-hunting 8 Canon law and witchcraft 9 St Thomas Aquinas: scholasticism and magic 10 The trial of Dame Alice Kyteler, 1324 11 Nicholas Eymeric: magic and heresy, 1376 12 The University of Paris: a condemnation of magic, 1398 13 Johannes Nider: an early description of the witches' sabbath, 1437 14 Heinrich Kramer: Malleus maleficarum, 1486 PART III Witch beliefs in the sixteenth and seventeenth centuries 15 Lambert Daneau: Protestantism and witchcraft, 1574 16 Henri Boguet: the threat of witchcraft, 1602 17 Nicolas Remy: the Devil's mark and flight to the sabbath, 1595 18 Martín Del Rio: the maleficia of witches, 1600 19 William Perkins: good and bad witches, 1608 20 Francesco Maria Guazzo: the pact with the Devil, 1608 21 Richard Bernard: The Demonic Pact in England , 1630 22 Pierre de Lancre: dancing and sex at the sabbath, 1612 23 Cotton Mather: the apocalypse and witchcraft, 1692 24 James Hutchinson: children, the covenant, and witchcraft, 1697 PART IV The trial and punishment of witches 25 Innocent VIII: papal inquisitors and witchcraft, 1484 26 Heinrich Kramer: the torture of accused witches, 1486 27 Jean Bodin: witchcraft as an excepted crime, 1580 28 Henri Boguet: the conduct of a witchcraft judge, 1602 29 King James VI: the swimming and pricking of witches,1597 30 Friedrich Spee: a condemnation of torture, 1631 31 Sir Robert Filmer: the discovery of witches, 1652 32 Sir George Mackenzie: judicial caution in the trial of witches,1678 33 King Louis XIV of France: the decriminalization of French witchcraft, 1682 34 Christian Thomasius: the prohibition of torture, 1705 35 The repeal of the English and Scottish witchcraft statutes, 1736 PART V Witchcraft trials in the sixteenth and seventeenth centuries 36 The confession of Walpurga Hausmännin, 1587 37 The confession of Niclas Fiedler at Trier, 1591 38 The trial of Françatte Camont in Lorraine, 1598 39 The confessions of witches in Guernsey, 1617 40 The confessions of Johannes Junius at Bamberg, 1628 41. The Witch-hunt at Eichstätt 1637 42 A Polish Witch-trial at Lublin, 1644 43 A Norwegian Witch-trial at Vardø, 1655 44 A Russian witch-trial at Lukh, 1657 PART VI Witchcraft trials in England, Scotland, and New England 45 Witches demonic familiars at Chelmsford, 1566 46 The trial of Agnes Sampson at Edinburgh, 1591 47 Witchcraft and the English Aristocracy, 1619 48 The trial and confession of Elizabeth Sawyer, 1621 49 The trial of Janet Barker and Margaret Lauder at Edinburgh, 1643 50 The Matthew Hopkins witch-hunt in Suffolk, 1645 51 Witchcraft prosecutions in Kent, 1645 52 The first confession of Isobel Gowdie at Auldearn, 1662 53 The Salem witchcraft trials, 1692 PART VII Demonic possession and witchcraft 54 Johann Weyer: the possession of the nuns at Wertet, 1550 55 The Possession of the Lancashire Seven, 1595-97. 56 Henri Boguet: the possession of Loyse Maillat, 1598 57 The possession of Marthe Brossier, 1599 58 Edward Jorden: demonic possession and disease, 1603 59 The possessions at Loudun, 1634 60 Cotton Mather: the possession of the Goodwin children, 1688 61 The possession of Christian Shaw, 1697 PART VIII The skeptical tradition 62 Johann Weyer: witches as melancholics, 1563 63 Reginald Scot: the unreality of witchcraft, 1584 64 Alonso de Salazar Frías: the unreliability of confessions, 1612 65 Thomas Hobbes: the nature of demons, 1651 66 Baruch Spinoza: the non-existence of the Devil, 1661, 1675 67 John Webster: witchcraft and the occult, 1677 68 Balthasar Bekker: the disenchantment of the world, 1695 Index

Brian P. Levack is the John E. Green Regents Professor in History at the University of Texas at Austin. His publications on witchcraft and demonology include The Witch-hunt in Early Modern Europe (3rd edition, 2006); Witch-hunting in Scotland: Law, Politics, and Religion (2008); and The Devil Within: Possession and Exorcism in the Christian West (2013). He has also edited The Oxford Handbook of Witchcraft in Early Modern Europe and Colonial America(2013).

In this video, author Brian Levack discusses interesting facts and misconceptions about witch-hunting, highlights current research in the field, and explains the best primary sources for studying the Early Modern period.

Levack’s textbooks,  The Witch-Hunt in Early Modern Europe and its fully integrated companion text The Witchcraft Sourcebook, are the perfect resources for both students and scholars of European witch-hunts.