The Works of Lord Bolingbroke
Volume 1 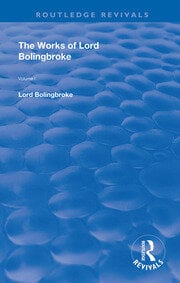 The Works of Lord Bolingbroke: Volume 1

Published in 1967: Accuracy and impartiality have been studied in the following Biography, more than elegance and that labored eulogy, which so often defeats its purpose. The quick genius and diversified attainments of the author and the statesman, have not been allowed to cast a glare over the vices of the man and the specious hollowness of the pretended philosopher.

1. The Life of the Author  2. A Letter to Sir William Windham: written in the year one thousand seven hundred and seventeen  3. Secret Letter from the Earl of Stair  4. Reflections upon Exile  5. The Occaional Writer, No. 1  6. The Occasional Writer, No. 2  7. The Occasional Writer, No. 3 8. The First Vision of Camilick  9. An Answer to the London Journal of Saturday, Dec. 21, 1728,  10. An Answer to the Defence of the Inquiry into the Reasons of the Conduct of Great Britain  11. A Final Answer to the Remarks on the Craftsman's Vindication; and to all the Libels which have come, or may come from the same quarter, against the Person last mentioned in the Craftsman of the 22nd May, 1731  12. On Luxury  13. Remarks on a late Pamphlet, entitled, Observations on the Conduct of Great Britain, &c., in a Latter to Celb D'Anvers, Esq., written in the year 1729  14. On Good and Bad Ministers  15. On the Policy of the Athenians  16. On the Power of the Prince and the Freedom of the People