The World Bank
From Reconstruction to Development to Equity 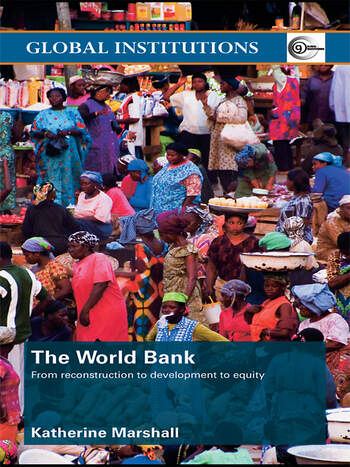 The World Bank: From Reconstruction to Development to Equity

The World Bank is one of the most important and least understood major international institutions. This book provides a concise, accessible and comprehensive overview of the World Bank's history, development, structure, functionality and activities.

These themes are illustrated with a wide variety of case studies drawn from the Bank's international activities. Also discussed are the controversial challenges that the Bank now faces in the light of the criticism from campaigners and NGOs.

Katherine Marshall is a Senior Fellow at Georgetown University's Berkley Center for Religion, Peace and World Affairs and Visiting Professor in the Department of Government. She worked for 35 years at the World Bank in a wide range of positions and regions.

'This slim volume is an invaluable aid to students of international law and international relations and anyone interested in the challenges of development for the vast majority of the world's population. It is clear, immensely readable, and infused with a lively appreciation of the World Bank's peculiar quirks and complexities. Often maligned and even more frequently misunderstood, the Bank plays a critical role both in global governance and global development policy. Katherine Marshall is an able and authoritative guide to its many rules and roles.' - Anne-Marie Slaughter, Princeton University, USA

'This book combines a thorough overview of where the Bank comes from, how it works, its challenges, and its mission and vision. Written by someone who knows the Bank deeply and intimately, it is honest, informative and insightful. It offers both an interpretation of this complex institution and a map of where its future lies.'- Managing Director of the World Bank Group, and Former Minister of Finance and Minister of Foreign Affairs of Nigeria

'For all its recent trials and tribulations, the World Bank remains one of the few agents capable of representing the 'general welfare' of the world. Katherine Marshall sets out neither to praise the Bank nor to bury it, but to provide an accessible guide to how it works – in theory and on the ground. Her book succeeds admirably. For the uninitiated it is the best guide available; and even Bank champions and Bank bashers will – or should – learn enough to make their arguments more nuanced.' - Robert Wade, London School of Economics and Political Science, University of London, UK

'Katherine Marshall’s book is a timely and important contribution to the debate on globalization and global governance. Written in an accessible and engaging style, Katherine’s book makes the World Bank and its staff come alive, and humanizes an organization that is often caricatured and imperfectly understood. Students of international relations and scholars of global governance will be well advised to read and use this useful volume as they discuss an institution that remains central to the future of our planet.' - James D. Wolfensohn, Former President of the World Bank Group