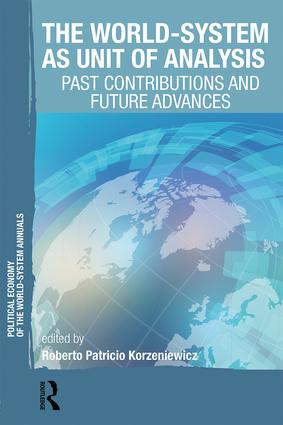 The World-System as Unit of Analysis

World-system analyses have recast the study of between- and within-nation country inequality as constituent aspects of a single field of inquiry: the study of inequality and social stratification as processes that always have been global in their very essence. World-system analyses maintain that global social stratification pivots around institutional arrangements that render distributional outcomes as simultaneously “national,” “gendered,” “racialized,” and “global” processes.

This book takes stock of some of the enduring theoretical and empirical contributions of a world-system perspective, and identifies promising directions for future inquiry and discussion. Some chapters reassess the scope and methodologies of world-system analysis around several key problems (e.g., the spatial and temporal boundaries of global commodity chains, the construction and challenge of various dimensions of social inequality, systemic and antisystemic social movements). Others take stock of areas in which world-systems are promoting methodological innovation and/or generating useful global data, and identify questions that demand additional methodological and empirical attention for future research.

In different ways, this book help us to critically reconsider some of the enduring legacies within a world-system perspective (such as Karl Polanyi’s concept of the “double movement,” or the distinction drawn by Giovanni Arrighi or Immanuel Wallerstein between systemic and antisystemic movements). As argued by many of the authors in this book, a world-historical approach calls for greater sensitivity to the manifold ways in which conceptual boundaries change over time and space. Taking seriously the issue of unit of analysis, this book explores critically productive ways for better understanding global patterns of continuity and change.

. By Way of Introduction: Selected Discussions on the Scope and Empirics of World-System Analysis (Roberto Patricio Korzeniewicz).

. Great Convergence or the Third Great Divergence? Changes in the Global Distribution of Wealth, 1500–2008 (Sahan Savas Karatasli and Sefika Kumral).

. The Longue Durée and Raw Materialism of Coal: Against the So-Called Death of Coal (Paul S. Ciccantell and Paul K. Gellert)

. Brokering Markets for Labor and Nature: Social Movements and the Transition to a Just Economy (Devparna Roy).

Roberto Patricio Korzeniewicz is Professor and Chair of Sociology at the University of Maryland, College Park (USA). His book Unveiling Inequality (NY, 2009), co-written with Timothy P. Moran, won the 2010 Best Book Award of the Political Economy of the World-System section of the American Sociological Association. His current research focuses on global patterns of income inequality, social stratification, and mobility.

Political Economy of the World-System Annuals