The World of Shipping 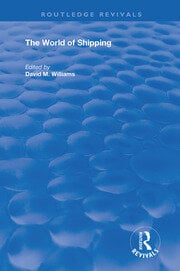 The World of Shipping

Published in 1997, this volume is a collection of seminal articles on a theme of central importance in the study of transport history, selected from the leading journal in the field. containing articles selected by a distinguished scholar, as well as an authoritative new introduction by the volume editor. The book will form an essential foundation to the study of the history of shipping.

Contents: Introduction: the world of shipping, David M Williams; The deployment of English merchant shipping: Michael and Joseph Henley of Wapping, ship owners, 1775-1830, Simon Ville; The creation of the Marine Department of the Board of Trade, J H Wilde; British oceanic mail contracts in the age of steam, 1838-1914, Freda Harcourt; Distance tamed: steam navigation to Australia and New Zealand from its beginning to the outbreak of the Great War, Frank Broeze; McGregor Gow and the Glen Line: the rise and fall of a British shipping firm in the Far East trade, 1870-1911, Malcolm Cooper; George Benjamin Dodwell: a shipping agent in the Far East, 1872-1908, Stephanie Jones; The depression in British Shipping, 1901-11, Derek H Aldcroft; Maritime activity and port development in the United States since 1900: a survey, R W Barsness; The development of the port of Lagos, c.1892-1946, Ayodeji Olokujo; From coal to oil in British shipping, Max E Fletcher; The development of Japan’s post-war shipping policy, Tomohei Chida.