The World of The Walking Dead 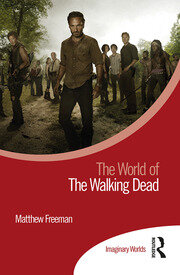 The World of The Walking Dead

From comics and television to social media, apps, and mobile games, utilizing concepts derived from literary studies, media studies, history, anthropology, and religious studies, Matthew Freeman examines the functions and affordances of new digital platforms. In doing so, he establishes a new transdisciplinary framework for analyzing imaginary worlds across multiple media platforms, bolstering the critical arena of world-building studies by providing a greater array of vocabulary, concepts, and approaches.

The World of The Walking Dead is an engaging exploration of stories, their platforms, and their reception, ideal for students and scholars of world-building, film and TV studies, new media, and everything in-between.

Matthew Freeman is Reader in Multiplatform Media and Co-Director of The Centre for Media Research at Bath Spa University, UK. His research concentrates on cultures of media production across the borders of platforms, cultures, industries, and history, publishing extensively on the cultural histories and industrial workings of transmediality. He has also published on such topics as media branding, convergence cultures, and methodological approaches to media industry studies.