The World of Wal-Mart
Discounting the American Dream 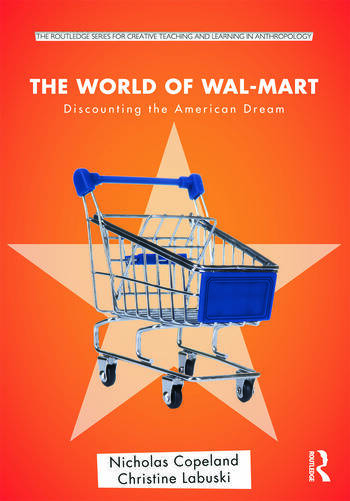 The World of Wal-Mart: Discounting the American Dream

This book demonstrates the usefulness of anthropological concepts by taking a critical look at Wal-Mart and the American Dream. Rather than singling Wal-Mart out for criticism, the authors treat it as a product of a socio-political order that it also helps to shape. The book attributes Wal-Mart’s success to the failure of American (and global) society to make the Dream available to everyone. It shows how decades of neoliberal economic policies have exposed contradictions at the heart of the Dream, creating an opening for Wal-Mart. The company’s success has generated a host of negative externalities, however, fueling popular ambivalence and organized opposition.

The book also describes the strategies that Wal-Mart uses to maintain legitimacy, fend off unions, enter new markets, and cultivate an aura of benevolence and ordinariness, despite these externalities. It focuses on Wal-Mart’s efforts to forge symbolic and affective inclusion, and their self-promotion as a free market solution to social problems of poverty, inequality, and environmental destruction. Finally, the book contrasts the conceptions of freedom and human rights that underlie Wal-Mart’s business model to the alternative visions of freedom forwarded by their critics.

Nicholas Copeland is a social anthropologist at Virginia Polytechnic University. His research about state power and Maya politics in Guatemala appears in the Journal of Latin American Studies and Development and Change. Nick taught at the University of Arkansas, and has conducted extensive market research inside Wal-Mart.

is an anthropologist and assistant professor in Women’s and Gender Studies at Virginia Polytechnic University. Her work can be found in Feminist Studies, Archives of Sexual Behavior, and several edited volumes about the gendered body. She has also spent countless hours inside of Wal-Mart stores as a market researcher.

This marvelous book analyzes how Wal-Mart assembles a seductive, imagined world of material abundance and folksy inclusion—even as its own corporate practices undermine the American Dream and intensify economic polarization. Through their compelling story of Wal-Mart, Copeland and Labuski offer readers a clear window into central economic policies and trends of the early 21stcentury—neoliberalism, globalization, the increased contingency of labor, and the erosion of local economies and places—as well as an array of counter-movements to such trends. This illuminating book is terrific for undergraduate courses in social inequality, rural sociology, globalization, American studies, labor, economic geography, environmental sustainability, and business ethics.

The World of Wal-Mart teaches us how to read a force of neoliberal commerce so powerful it feels like a force of nature, so big it overwhelms the American Dream itself. The Wal-Mart of this book is a supercharged mega-magnet pulling into its wake big box sprawl, shopping addictions, boarded up Main Streets, patriotism, a loyal workforce, an astounding array of cheap products, the promise of thrift, reduced legal protections for organized labor, and ordinary anxieties set adrift as consumers push their baskets along its aisles. It’s a centrifuge spinning off elements: an aura of normalcy, Christian family values, smiley faces, low prices and low wages, guilt, derision, deregulation, law suits, the hidden costs of its business model. This Wal-Mart is a public secret that has turned the consolidation of power and the concentration of wealth in America into an ordinary ditty orchestrating what everyone knows but we can’t quite recognize. This remarkable book expertly puts it together for us.

Incisive, vividly analyzed, and utterly teachable, this book examines Wal-Mart as a product and producer of contemporary American society.  Probing how Wal-Mart works from production to consumption to public relations, this outstanding book offers far-reaching arguments about the power and influence of corporations and the politics of freedom, labor, and value in the United States today.

Told with verve and momentum, this gem of a book is ideal for the classroom. It does an exceptional job of showing how America made Wal-Mart, and how Wal-Mart made America. Along the way, The World of Wal-Mart demonstrates why anthropology in particular is well-suited for making sense of the world we live in.
--Steve Striffler, Latin American Studies, University of New Orleans