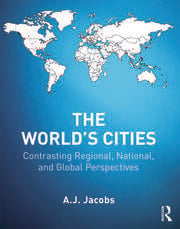 The World’s Cities offers instructors and students in higher education an accessible introduction to the three major perspectives influencing city-regions worldwide: City-Regions in a World System; Nested City-Regions; and The City-Region as the Engine of Economic Activity/Growth.

The book provides students with helpful essays on each perspective, case studies to illustrate each major viewpoint, and discussion questions following each reading. The World’s Cities concludes with an original essay by the editor that helps students understand how an analysis incorporating a combination of theoretical perspectives and factors can provide a richer appreciation of the world’s city dynamics.

"The book does a great job of including three major, but usually separate, perspectives on urban studies. Leading authors are represented, such as Abu-Lughod, Friedmann, Hill, Sassen, Scott and Storper, and Short…. For undergraduate courses, the global view provided by the book is more important. Chapters on Asia and North America in all three parts, chapters on Mexico City, Johannesburg, and Dubai representing Latin America, Africa, and Middle East, respectively, and chapters on Europe primarily in Part III, are nicely balanced. " –Ed Malecki, Geography, Ohio State University

"The World’s Cities goes where other readers have not ventured. The variety of theoretical perspectives and cases is truly impressive. The book offers an enticing invitation to a dialogue about cities and regions across the world." –Michael Indergaard, Sociology and Anthropology, St. John’s University

"This book provides a valuable framework and exemplars for understanding and analyzing the transformation of the world’s major cities in the era of globalization."–Michael Timberlake, Sociology, University of Utah

This is the volume for which the teachers of global cities courses have long been waiting. Jacobs mixes classic articles and theoretical perspectives with interesting case studies of Tokyo, Shanghai, Jakarta, London, Mexico City, New York, Toronto, and more--material to which students can actually relate. Jacobs has produced a most usable volume for the classroom!--Myron A. Levine, Urban Affairs, Wright State University

Cities no longer only serve and thrive locally and operate in highly complex regional and global environments. The World’s Cities is a compilation of contributions to three major schools of thought on how cities interact within their contexts, and what constitutes these contexts. Students and scholars of cities will find this book a great resource.--Mahyar Arefi, Planning, University of Cincinnati