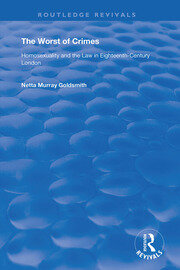 The Worst of Crimes: Homosexuality and the Law in Eighteenth-Century London

First published in 1998, this volume discusses the anomalies, inconsistencies and miscarriages of justice that arose as our ancestors decided what to do with defendants accused of the so-called ‘worst of crimes’. It reveals the ambivalence of eighteenth-century society about homosexuality, against a background of official condemnation. Homosexuality became a significant social land legal issue in the eighteenth century, especially in London, with its fast-growing population. No one dared to say publicly that it should be tolerated, yet the reactions of men and women to the homosexuals in their midst were varied and complex.

Moving from the Old Bailey to the court of King’s Bench, this volume studies original trial documents and other manuscript sources. The author provides a clear and detailed account of the legal procedures involved when a man was accused of a homosexual offence, from the time of his arrest to his conviction or acquittal. The book goes on to examine the range of motives for bringing such prosecutions, as well as the factors that influenced judicial verdicts, the penalties that conviction incurred, and the effect that such allegations had on an individual’s reputation and social status. It also discusses the attempts to produce legislation to deal effectively with blackmail, and the difficulty of successfully bringing a prosecution against extortioners.

The author shows how a reactivated sodomy law put all eighteenth-century male heterosexuals in fear and suggests that it led to a distorted concept of masculinity, the impact of which was felt by subsequent generations.

This book will appeal to students of legal and social history, as well as to general readers interested in eighteenth-century attitudes to homosexuality and their legacy for both the homosexual and heterosexual communities of the next two centuries.

Part 1. Affirmation and Denial. 1. Homosexuals in Eighteenth-Century London. Part 2. Rhetoric and Practice. 2. Homosexuals and the Law. Part 3. Sodomy and the Old Baily, 1730-51. 3. Judge Page and Others, 1730. 4. The Princess Seraphina. 5. Willing and Reluctant Ganymedes. 6. Consenting Adults. 7. Racial Prejudice. 8. The Advantage of Taking Counsel. Part 4. Victims of Malice. 9. Blackmail and the Fall of Samuel Foote. Part 5. Edward Walpole and the Conspirators. 10. Taking Sides. 11. The Counter-Attack. 12. Blind Justice. 13. The End of the Story. Part 6. Last Questions. 14. Who was to Blame?