Theater and Nation in Eighteenth-Century Germany 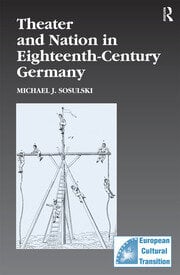 Theater and Nation in Eighteenth-Century Germany

In 1767, more than a century before Germany was incorporated as a modern nation-state, the city of Hamburg chartered the first Deutsches Nationaltheater. What can it have meant for a German playhouse to have been a national theater, and what did that imply about the way these theaters operated? Michael Sosulski contends that the idea of German nationhood not only existed prior to the Napoleonic Wars but was decisive in shaping cultural production in the last third of the eighteenth century, operating not on the level of popular consciousness but instead within representational practices and institutions. Grounding his study in a Foucauldian understanding of emergent technologies of the self, Sosulski connects the increasing performance of body discipline by professional actors, soldiers, and schoolchildren to the growing interest in German national identity. The idea of a German cultural nation gradually emerged as a conceptual force through the work of an influential series of literary intellectuals and advocates of a national theater, including G. E. Lessing and Friedrich Schiller. Sosulski combines fresh readings of canonical and lesser-known dramas, with analysis of eighteenth-century theories of nationhood and evolving acting theories, to show that the very lack of a strong national consciousness in the late eighteenth century actually spurred the emergence of the German Nationaltheater, which were conceived in the spirit of the Enlightenment as educational institutions. Since for Germans, nationality was a performed identity, theater emerged as an ideal space in which to imagine that nation.

Michael J. Sosulski is Assistant Professor of German in the Department of German, Kalamazoo College, USA.

’Overall, Sosulski's book is original, fascinating, and engaging. It can only be hoped that it will contribute to an increasing interest in contextualization in German theater historiography.’ H-German ’... clearly written... a very readable account of the German theatre scene in the eighteenth century.’ Theatre Research International