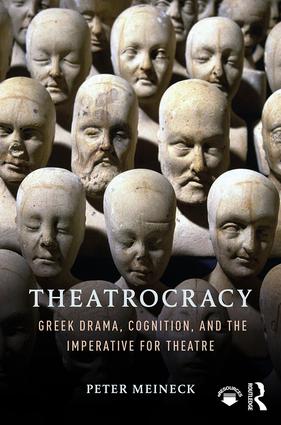 Greek Drama, Cognition, and the Imperative for Theatre, 1st Edition

Theatrocracy is a book about the power of the theatre, how it can affect the people who experience it, and the societies within which it is embedded. It takes as its model the earliest theatrical form we possess complete plays from, the classical Greek theatre of the fifth century BCE, and offers a new approach to understanding how ancient drama operated in performance and became such an influential social, cultural, and political force, inspiring and being influenced by revolutionary developments in political engagement and citizen discourse. Key performative elements of Greek theatre are analyzed from the perspective of the cognitive sciences as embodied, live, enacted events, with new approaches to narrative, space, masks, movement, music, words, emotions, and empathy. This groundbreaking study combines research from the fields of the affective sciences – the study of human emotions – including cognitive theory, neuroscience, psychology, artificial intelligence, psychiatry, and cognitive archaeology, with classical, theatre, and performance studies.

This book revisits what Plato found so unsettling about drama – its ability to produce a theatrocracy, a "government" of spectators – and argues that this was not a negative but an essential element of Athenian theatre. It shows that Athenian drama provided a place of alterity where audiences were exposed to different viewpoints and radical perspectives. This perspective was, and is, vital in a freethinking democratic society where people are expected to vote on matters of state. In order to achieve this goal, the theatre offered a dissociative and absorbing experience that enhanced emotionality, deepened understanding, and promoted empathy. There was, and still is, an urgent imperative for theatre.

This is an exhilarating read, a feast of ideas for those with an interest in the cognitive and emotional power of Greek drama. Peter Meineck uses his knowledge as an academic in Classics, his experience as a theatre practitioner and recent research into the cognitive sciences to rethink Aristotle’s Poetics with an eye to the experience of Greek drama in performance.

It is only appropriate that a book grounded in cognitive theory, cultural neuroscience and psychology should change the way you think and feel about Greek drama. Peter Meineck's book succeeds on both accounts.

As a researcher it has changed the way I think about the emotional and cognitive experience of Greek tragedy in ancient and modern performances; as a lecturer it will influence the way I teach Greek drama to my students in years to come.

Chapter 3 – Ethos: the character of catharsis

Chapter 5 – Melos: music and the mind

Peter Meineck is Professor of Classics in the Modern World at New York University, USA. He founded Aquila Theatre in 1991 and has since produced and directed more than 50 professional classical theatre works. He has also directed several National Endowment for the Humanities classics-based public programs, including the Chairman’s Special Award-winning Ancient Greeks/Modern Lives and The Warrior Chorus national veteran’s program. He has written widely on ancient theatre and its reception, and has published several translations of Greek drama.