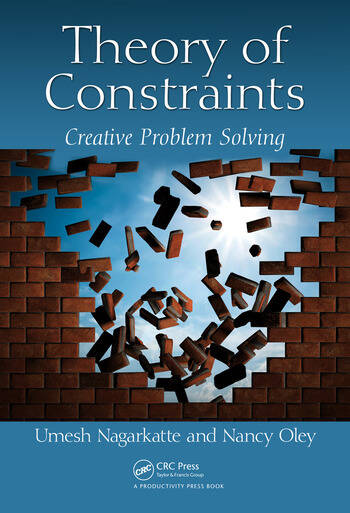 This book was written to assist professionals and students to become proactive in their own education, improve thinking, resolve personal and interpersonal conflicts, improve pedagogy, manage departmental affairs and guide administrative decisions. The text captures the practical experience of the authors with and formal training in TOC to address many of the issues facing today’s education stakeholders.

Chapter 4: What to Change to?

Chapter 5: How to Cause the Change? Prerequisite Tree, Project Plan, and Transition Tree

Chapter 7: Epilogue: How Did We Do?

Dr. Umesh Nagarkatte received his Ph.D. in algebraic number theory from the Graduate Center of the City University of New York (CUNY) in 1976. He underwent dedicated Jonah training at the Avraham Goldratt Institute with two of his colleagues in 2002. The team became pioneers in higher education to implement the theory of constraints and thinking process tools by using the college as the system. He has been certified as a Facilitator by TOC for Education, Inc. (TOCfE).

Dr. Nagarkatte, with the assistance of coauthor Nancy Oley as editor and evaluator, received federal grants in 2001-2004, 2004-2007, 2005-2007, 2010-2013, 2012-2015, and 2013-2016 for using the theory of constraints (TOC)/thinking processes (TP) to address the problem of attrition. He has used TOC/TP with his fellow Jonah, Dr. Joshua Berenbom, to develop three textbooks - Prealgebra, Elementary Algebra, and Intermediate Algebra – adapting the Singapore model method to the college level. Oley and Nagarkatte started working on the current book on TOC/TP in 2010 to empower students, counselors, educators, and other stakeholders to work as a team to ensure student success.

Dr. Nagarkatte taught at the Borough of Manhattan Community College, CUNY, from 1971 to 1976. He recently retired as Professor of Mathematics from Medgar Evers College, CUNY, where he has taught since 1978. His research interests are in algebraic geometry; number theory; applications of mathematics to chemistry and environmental science, philosophy, and meditation; and applying the TOC/TP to all areas of interest.

Dr. Oley has pioneered the incorporation of TOC processes and concepts within the content of her psychology courses, helped to develop TOC curricula for incoming college students, created a short TOC course/workshop for remedial math students, and collaborated with Dr. Umesh Nagarkatte for over 10 years on numerous federally funded TOC-related grants and projects aimed at optimizing the college system to improve curriculum and instruction in mathematics and to reduce attrition.

Dr. Oley has held positions of leadership in university governance as well as in state and national scientific organizations, and has published in the areas of pain/analgesia, memory, nervous system regeneration, olfaction, and the teaching of psychology. She has engaged undergraduate and graduate students at a variety of institutions, among them Augustana College (Illinois), the University of Hartford, Trinity College (Connecticut), Columbia University, and Medgar Evers College, CUNY, from which she recently retired as professor emerita of psychology.

…[the] book will be very beneficial to teachers, students, administrators, counselors, and anyone who wants to think clearly for making life meaningful. Personally the Creative Thinker’s Toolkit will be a great reference for me to run my class ‘Thinking Process for Creative Problem Solving.’"

"Those who practice TOC Thinking Processes appreciate their real value. At first glance it seems to be merely a set of logical diagrams. But, their intrinsic value goes much beyond that. They are designed to achieve breakthrough results in the desired field of operation. Achieving a breakthrough starts with challenging the status quo and overcoming inertia. In order to achieve substantially better results we need to rigorously apply three fundamental powers in our possession: emotion, intuition and logic. Emotion is critical. Only passionate people have the stamina to march through the tedious road leading to breakthrough results. Moreover, on matters we don’t care about. we have zero intuition. Emotions feed the needed intuition to find the right path, to come up with new ideas. Intuition is critical. It fuels logic. Without intuition, applying logic will be, at best, a theoretical exercise with little practical consequence. Logic is critical. Intuition alone can lead us astray. Applying intuition within a logical framework helps us to guide our intuition in the right direction. It helps us to identify missing elements and to devise corrective actions where gaps appear. It helps us to communicate our intuition to other people and to obtain their collaboration. The TOC Thinking Processes support us to achieve this goal. They boost our ability to apply intuition in an area we greatly care to improve, and when used correctly, to achieve breakthrough results. The authors of this book have applied these tools to the field of higher education. They share their journey on the path to remarkable results in student retention and academic achievement, a core problem of many colleges and society as a whole. But this is just one aspect of their story. Going through the chapters we get an opportunity to learn how the Thinking Processes can be used with students in order to achieve the higher goal of education which is 'to prepare students for life.'"