Theresa May, The Hostile Environment and Public Pedagogies of Hate and Threat
The Case for a Future Without Borders 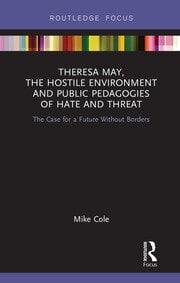 Theresa May, The Hostile Environment and Public Pedagogies of Hate and Threat: The Case for a Future Without Borders

Theresa May, The Hostile Environment and Public Pedagogies of Hate and Threat analyses Theresa May’s involvement in the creation and promotion of public pedagogies of hate and threat around the issue of immigration, which are used to instil fear, stress and anxiety among large sections of the population.

This book uses public pedagogy as a theoretical lens and examines the economic and political backdrop to the hostile environment, before moving on to a consideration of its creation and consolidation by Theresa May as Home Secretary and later as Prime Minister. The effects of the hostile environment on health and education are addressed, as well as its specific impacts on asylum seekers and women. The book also interrogates the Windrush scandal and divided families, as well as the author and his family's personal experiences of the hostile environment. It concludes by considering the escalation of racism in general, the crisis in neoliberalism, and the case for a socialist future without borders.

This topical book will appeal to doctoral, postgraduate and advanced undergraduate students in the fields of education studies, pedagogy and sociology as well as those interested in UK politics.

1.Immigration and the hostile environment: backdrop, creation and consolidation.

2. May ups the ante and becomes Prime Minister.

4.The Windrush scandal, divided families and the Tory assault on family life.

5. The escalation of racism, the crisis in neoliberalism, and public pedagogy for a borderless socialist future.

Mike Cole is Professor in Education in The International Centre for Public Pedagogy, College of Professional Services at the University of East London, UK. He is the author of Trump, the Alt-Right and Public Pedagogies of Hate and for Fascism: What Is To Be Done? (Routledge, 2019).

'We can be thankful to Mike Cole on a number of counts for this clear sighted critique of political ideology and most especially the emergence of what he refers to (developing a specific discourse) as ‘public pedagogies’ of hate and threat. This latter approach, to my mind, places Cole in a tradition of public intellectual Marxists such as Stuart Hall up to Henry Giroux. Cole persuasively shows how the rhetoric of ‘hate and threat’ is shared across the spectrum of Rightist ideology. But there is also a yearning and convincing hope which emerges through the clear eyed descriptions of existential pain which fill this book – the challenge for the Left, both in political and pedagogical terms, is to once more rebuild a critical, coherent, compassionate and successful alternative to the toxic politics of the contemporary Right.'

Jones Irwin, Associate Professor in Philosophy and Education at the Institute of Education, Dublin City University, reviewing in British Journal of Educational Studies.

'Mike Cole skilfully utilizes the lens of public pedagogy to examine the increasingly hostile politics of the UK within this contemporary moment. By so doing, he shows the inextricable connection between conservative state policies and worsening conditions of racialization, violence, and economic decline, in lives of immigrant and other subaltern communities. In light of rising immigration and political antagonisms worldwide, Cole’s book is indeed a timely contribution.'
Antonia Darder, Leavey Endowed Chair of Ethics & Moral Leadership, Loyola Marymount University, Los Angeles, USA

'Theresa May’s legacy will be the enduring images of ‘Go Home’ vans in neighbourhoods like mine, of children growing up without their parents and of black Britons being sent back to the Caribbean in chains. Not since Enoch Powell has Britain seen a minister so enthralled by the power of fear and hate.
Cole’s book forensically examines May’s time in office, the cost of which will be counted for years to come in the lost lives and livelihoods of those who have fought simply to live with dignity in an increasingly hostile environment.'
Satbir Singh, Chief Executive, The Joint Council for The Welfare of Immigrants (JCWI), UK

'Through the theoretical lens of public pedagogy, Cole incisively takes apart Theresa May's hostile environment approach. This has been used to create misery for so many (including the author himself). The book is an exposé and the reader will be aghast at Cole’s documentation of human-rights violations. The book crosses many disciplinary boundaries and will appeal to everyone interested in social justice and how to achieve it.'
Alpesh Maisuria, Senior Lecturer in Education Studies, University of East London, UK

'Cole presents a Marxian discourse analysis of Theresa May in the form of an important case study of the interaction of media and policy that is urgently needed. This text investigates the cultural and economic scapegoating of the most vulnerable populations after the 2008 advent of the global recession, blame-placing simultaneously used by conservatives to enact and justify austerity measures. Far from being a ‘moderate conservative’ as is often portrayed via commentators, May has used her political position for years to cultivate racist and xenophobic policies that are linked with the global rise of the far right. The reader will be able to trace a direct line from May to the disaster that is Brexit, including making connections between immigration policy in the UK and other countries such as the US. Most importantly, the text serves as a blueprint for how conservative parties enable the far right in the hopes that they can achieve their political aims, along with how quickly they can then lose control of the narrative once that happens.'
Faith Agostinone-Wilson, Professor of Education, Aurora University, USA