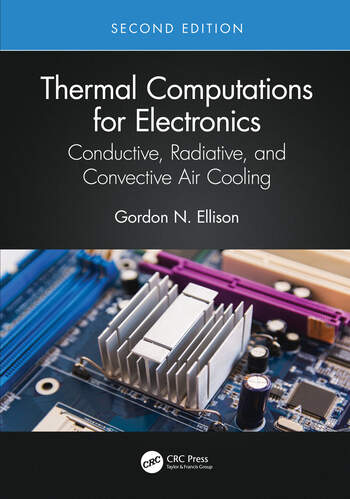 The first edition of Thermal Computations for Electronics: Conductive, Radiative, and Convective Air Cooling was based on the author's lecture notes that he developed over the course of nearly 40 years of thermal design and analysis activity, the last 15 years of which included teaching a university course at the senior undergraduate and graduate levels. The subject material was developed from publications of respected researchers and includes topics and methods original to this author. Numerous students have contributed to both the first and second editions, the latter corrected, sections rewritten (e.g., radiation spatial effects, Green's function properties for thermal spreading, 1-D FEA theory and application), and some new material added.

The flavor and organization of the first edition have been retained, whereby the reader is guided through the analysis process for systems and then components. Important new material has been added regarding altitude effects on forced and buoyancy driven airflow and heat transfer. The first 20% of the book is devoted to the prediction of airflow and well-mixed air temperatures in systems, circuit board channels, and heat sinks, followed by convective (PCB-mounted components included), radiative, and conductive heat transfer and the resultant temperatures in electronic equipment. Detailed application examples illustrate a variety of problems.

This book is a valuable professional resource for self-study and is ideal for use in a course on electronics cooling. It is well-suited for a first course in heat transfer where applications are as important as theory.

Gordon N. Ellison has a BA in Physics from the University of California at Los Angeles (UCLA) and an MA in Physics from the University of Southern California (USC). His career in thermal engineering includes twelve years as a Technical Specialist at NCR and eighteen years at Tektronix, Inc., retiring from the latter as a Tektronix Fellow. Over the last fifteen years Ellison has been an independent consultant and has also taught the course, Thermal Analysis for Electronics, at Portland State University, Oregon. He has also designed and written several thermal analysis computer codes.